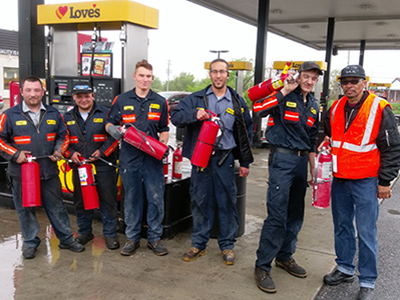 On April 25, an unusual call came over the radio at Love's 407 in Carlisle, Pennsylvania. A truck was on fire near the entrance to the lot. As luck would have it, the tire shop had recently wrapped up a meeting. There were plenty of hands available, and they all instinctively rushed to help.

Led by Tire Care Manager Tony Ventura, a group of about eight employees grabbed fire extinguishers and dashed out of the store. What awaited them was a truck about 25 feet from the store's lot entrance with flames engulfing both sets of drive tires. Ventura opened the driver's door to verify no one was in the cab. Fortunately, the driver escaped and was about 100 yards away.

The group attempted to knock down the blaze with their fire extinguishers. However, the fire was caused by overheated brakes. Even after emptying every extinguisher available, the brake chambers were still hot enough to continue reigniting. Thinking quickly, the group switched to 5-gallon buckets to douse the flames. The only problem was their water source was about a 70-yard sprint. That didn't deter the team from continuing to suppress the fire for 15-20 minutes until fire fighters arrived to take over.

The fire department finished extinguishing the blaze and cooled the brake chambers enough to prevent more flare ups. The heat caused the truck's tires to burst, but General Manager Doug Eckart believes the situation could have been much worse.

"Their actions probably saved the driver an entire rig," said Eckart. "It's reassuring as a GM to know, even though there were some pretty serious ramifications, (the team) stepped up to do the right thing."

Love's prides itself on the safety of our locations. Everyone who rushed to help, from directing traffic away from the scene to suppressing the fire, played a key role in making a dangerous situation as safe as possible. With the proximity of the fire to other Customers, the pumps and the store, the scenario could have gotten out of control in a hurry had it not been for the quick thinking and selfless actions of the employees at Love's 407.