"Take ownership, it's your store!"

Rick Rauch has given that advice to countless coworkers he has trained at Love's 114 in El Reno, Oklahoma. After 14 years on the job, Rauch is retiring. Last week, employees at Love's 114 held a retirement celebration for him. District Manager Lawrence Finney says Rauch has been dedicated to every aspect of the business, calling him the "knowledge guru" of the store. "There's nothing that he can't tell you about the operation, employees and customers," Finney said.

Rauch considers fellow employees members of his family and they feel the same. "My kids callhim papa!" said General Manager Jamie Langford. For Rauch, commitment to family is an important reason for his longevity with the company. "Love's stood behind me when my wife was having health trouble,"  Rauch said, adding that many other companies would have gotten rid of him under similar circumstances.

Love's has been a family tradition for Rauch, long before he stepped into Love's 114 for his first overnight shift more than a decade ago. In the early days of the company, Rauch's father ran a gas station for Tom Love starting in the late 60's. A big testament to Rauch's success has been his outgoing personality, but that wasn't always the case. Before he joined the company, Rauch admitted he was quite shy. "Love's brought me out of my shell," he said. Since then, his coworkers say Rauch hasn't stopped talking. "It will be a lot different without Rick pestering us," Operations Manager Michelle Taylor jokingly said.

Although he will no longer be helping keep things running smoothly at Love's 114, Rauch said coworkers and customers haven't seen the last of him. Rauch, who lives nearby, plans to visit his friends with more conversations and plenty of laughter. 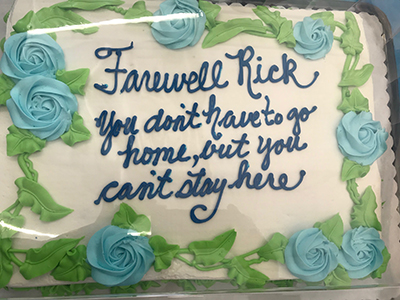 Thank you, Rick, for your years of service as a great person who cares, and we wish you the best in retirement!