Nebraska veteran recalls sacrifices made both past, present

Nebraska veteran recalls sacrifices made both past, present 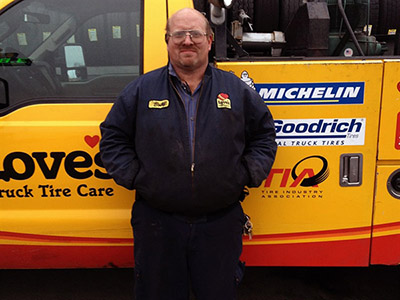 All gave some, and some gave all. If Veterans Day could be encapsulated with one sentence, it would be that for Bob Mobley.

Mobley served in the United States Army for six years (1990-96) as a truck mechanic, an experience that has served him well now that he's a Truck Tire Care manager for Love's 309 in Aurora, Nebraska.

Not only was Mobley a truck mechanic in the army, he was also a paratrooper, falling from the sky 1,000 feet at a time depending on a "little piece of silk" to keep him alive. Even though his unit never saw battle while stationed in Germany, Mobley said not every paratrooper survived his or her training, a reminder that sacrifices are made in times of peace as well as during times of war.

In reality, Mobley learned his truck trade growing up in rural Nebraska, not that the mechanical work in the military hurt. However, where serving his country has really helped him in business is with leadership.

"As a leader in the military, you're responsible for your people," Mobley said, although he noted that it's quite the adjustment going from the military to civilian life.

"You have to be more flexible in civilian leadership," he said.

Military life isn't for everybody, Mobley acknowledges, but there isn't any question as to why we honor those who have served on Veterans Day.

"It's the land of the free because of the brave," Mobley said.

And we honor brave people like Bob Mobley who have dutifully served our country. We're proud to call Bob a part of the Love's family.