Love’s employee in Arizona saves the life of a customer

Love’s employee in Arizona saves the life of a customer 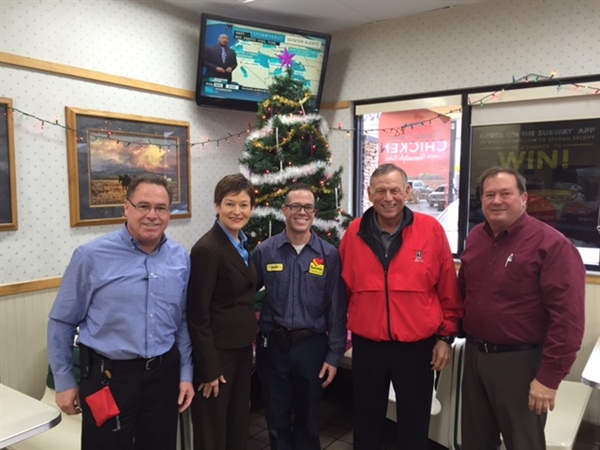 The holiday season could have been very different for the family of a Love’s Travel Stops customer if not for the quick actions of five employees at Love’s 272 in Kingman, Arizona.

Earlier this month, a man collapsed in the store. The five employees would later learn that he suffered a heart attack, but at the time, they just knew that a customer needed help. What they did in the short time it took for the fire department to arrive helped him survive.

Sonnier recognized the urgency of the situation and asked Dietrich for help. Dietrich checked on the man and called for more help over the store’s radio headset. Davis called 911. When Patriquin arrived, the customer was turning purple.

“My dad is a fireman, and he told me if there’s ever an emergency to assess the situation, and if there are professionals, let them do their job," Patriquin said. "I asked if anyone knew CPR. When people said no, I cleared the area and started doing chest compressions.”

After the fire department arrived, Nordberg assisted them by hauling their equipment inside, allowing the professionals to fully devote their attention to the customer. The fire department took the man to a nearby hospital where he is recovering.

Last week, the Pinion Pine Fire District presented the five employees with a certificate recognizing them for “their swift actions resulting in a life saved.”

The victim’s niece couldn’t attend the presentation, but she sent a letter to the employees expressing her family’s gratitude.

She writes, “The values held by the employees that night is the example of the caliber of people working for your organization on a daily basis. These values not only exist for the workplace, but carry forward in the very lives of these people outside work.”

“I’m very proud of the crew. It looked like we knew what we were doing, but it was one of those things that I had never experienced,” Patriquin said. “I know that if others had the opportunity, they would do the same.”