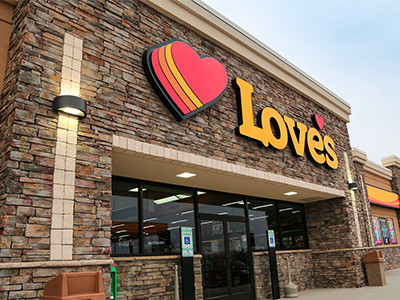 John Bolding had a truck and a dream, and he eventually had his own authority. That's when the Haskell, Oklahoma man reached out to Love's Financial.

Except that we don't know the owner of B&B Trucking of Haskell as John or Mr. Bolding. We know him as Beaver.

"Grandpa named me that when I was a baby," he said.

And Beaver is our first Love's Financial Driver of the Month for 2015. We talked to him this week about his business and how he became a professional driver.

"I've been around it all my life. From the time I could walk, I went with my three uncles from job site to job site," Beaver said. "I first started driving when I was 12."

Beaver had just started his own authority when a sales specialist named Josh reached out to him and asked him about freight factoring. In case you weren't aware of what factoring is, it's a process where the factoring company pays the driver for an invoice on the spot. The factoring company then collects payment for those freight bills from your customer or broker on behalf of the driver, allowing the driver to get back on the road and focus on the next load.

"I hadn't even hauled a load yet, and I had talked to so many factoring companies. Josh offered me the best deal up to that point," Beaver said.

The relationship with Love's Financial is about a year old now, and Beaver tells us that he couldn't be in the trucking business without freight factoring.

"I cannot say enough good to other drivers to get my point across. For me, as an owner-operator, this is as good as it gets," Beaver said. "I've gotten my money in 24 hours, and my fuel money is sent to me within a few hours."

He can't say enough about the personal touch Love's offers, too.

"No other factoring company can touch the way I am treated by Love's, and that includes the attention I get any time I need anything," Beaver said.

We thank Beaver for talking to us and being our first Driver of the Month. If you'd like to take his advice and consider freight factoring, we'd like to talk to you: Call us at 1-855-495-LOVES (5683) or get a quote here.