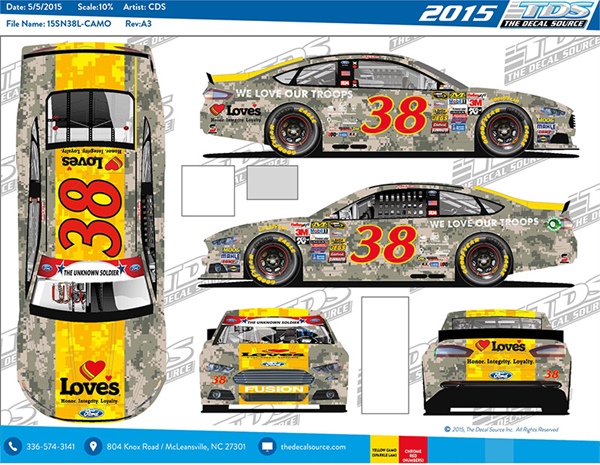 Charles "Wahoo" Sampson's main job each week for the Front Row Motorsportsteam is to get the Love's 38 driven by David Gilliland to its racetrack destination on time. The car he delivers to the Charlotte Motor Speedway days before the Coca-Cola 600 on Memorial Day weekend will be extra special.

And it will have his imprint on the windshield.

In honor of those killed in service of the United States, NASCAR is displaying the names of fallen soldiers on race cars, the specifics of which were up to the teams, sponsors and drivers. Front Row looked to their 47-year-old team member, a Marine who has served many tours of duty and who lost a number of brothers during that time.

"We're more excited for NASCAR to allow us to give Wahoo the honor," said team spokesman Jacob Wyne. "And what he chose was unique."

Wahoo picked "The Unknown Soldier," dedicated to all soldiers of all ranks and all branches and dates of service who made the ultimate sacrifice for America. Wahoo said he couldn't identify just one person to remember.

"There's not just one individual to honor. There's a lot," he said.

A Lilesville, North Carolina, resident, "Wahoo" Sampson decided to go into the military out of high school but chose the Marine Corps because of a man named George Dolak, a man Wahoo has always considered a father figure.

"My father wasn't around much. (Dolak) had two daughters, and he wanted a son," Wahoo said.

"I chose to go into the military for my own personal reasons, but I chose the Marines because of him," he added.

Wahoo prefers not to go into detail about his time in combat, only noting that he's immensely grateful to those who made the ultimate sacrifice.

"I cherish the opportunity to have my family and to be there for them," he said.

Wahoo has been with the Front Row team for the past two seasons but has been in NASCAR for a decade. How he made his foray into the sport he grew up loving as a kid is a fascinating story.

It involves The Intimidator, the one and the only Dale Earnhardt.

Wahoo was driving a truck for a local North Carolina company that delivered to Dale Earnhardt, Inc. (DEI). Each time he'd stop there, he'd leave a resume, handing it to whomever would take it -- and one time that included handing it to a man who was weed eating around the premises.

That man was Dale Earnhardt, and Wahoo got that big break in the racing business, working on a test team for Dale Earnhardt Jr. and Martin Truex Jr. It was perseverance that got Wahoo into NASCAR, and it's a willingness to do everything it takes that keeps him in the sport.

"My job is to get everything to and from safely, but really it's pretty much anything these guys need," Wahoo said.

And he knows the race car he's delivering to Charlotte for the May 24 Coca-Cola 600 is extra special indeed.