Love's teams step up as Hurricane Matthew bears down

Love's teams step up as Hurricane Matthew bears down 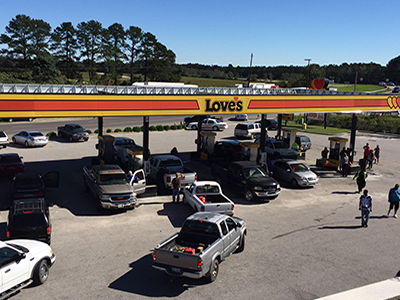 With millions affected by Hurricane Matthew, Love's teams across the southeast stepped up to care for one another and our Customers.

Love's 467 in Fort Pierce, Florida, was the last store in its area to close Thursday, Oct. 6, and the first store open Friday, Oct. 7. All told, the store was closed less than 12 hours. General manager Lisa Steele recalls how jumping in and being present for her Customers made a difference.

"Being short staffed, we did the best we could with what we had," Steele said. "Everyone thanked us for being open."

Henry Smith, general manager of Love's 415 in Fort Pierce, understands firsthand how flexibility can fare well for our Customers and team members. He emphasized open dialog between employees and patrons brings a greater understanding of what is to come next.

"We had good contingency plans for the storm," Smith said. "The team rallied together and prepped for the storm. Because of the preparations, our transition after the storm was smoother, and Customers were so happy."

Love's 603 in Jacksonville, Florida, also felt the love from travelers and locals alike. Operations manager Rodney Johnson shared that people were thanking the team every day for being open and having what they needed.

"It's an awesome feeling to be here and be a part of a team and company that care for the community," Johnson said.

Love's 405 in Brunswick, Georgia, sustained a collapsed canopy over its diesel pumps due to the storm, but that didn't hinder the spirit of the store team. 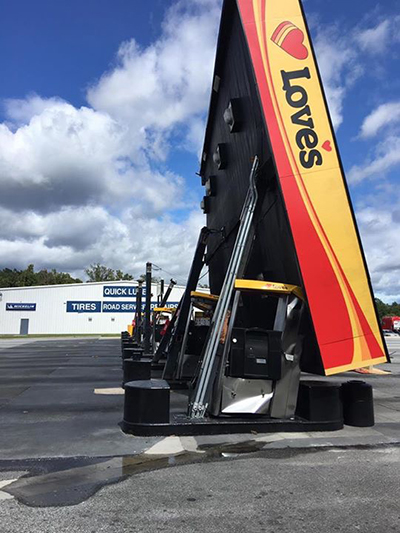 "Even with the diesel down, technology issues and the restaurant down for a day, we remained calm, patient and organized," said Love's 405 general manager Stacy Richardson. "Customers were continually thankful we were able to serve them."

Our teams continued to amaze us in the ways they catered to Customers' needs. Some stores were water-focused and others provided a much needed hot meal. However, Love's 371 in Dillon, South Carolina, became a fuel oasis for four-wheel traffic.

"The gas line was two miles long," said Love's 371 general manager Lamin Jagana. "People are coming in from North Carolina and all over. We were the only station that had power so everyone came here to fuel up. The sheer amount of Customers was amazing." 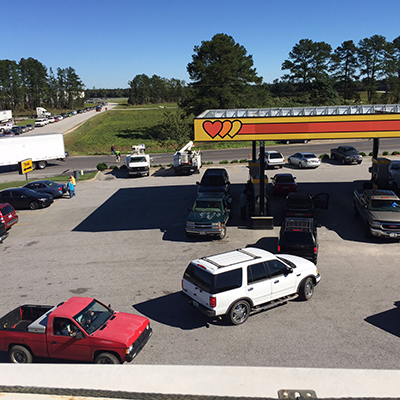 With all of those Customers, Jagana knew he could count on his team to take care of business.

"I'm thankful for my employees," Jagana said. "They really stepped up. Some of my employees stayed here during the storm from 7 a.m. and left at 10 p.m. when the storm was over. And they came back first thing in the morning to make sure I was OK. My employees keep me motivated."

As the hurricane dissipated, flooding spread across the Carolinas, which left one location in a unique position.

Interstates 95 and 40 were closed near Love's 412 in Dunn, North Carolina. Plus, the store was without power for multiple days.

We're continually grateful for the men and women who keep us up and running during times of crisis. Love's employees work hard every day to provide Clean Places and Friendly Faces to Customers from coast to coast.