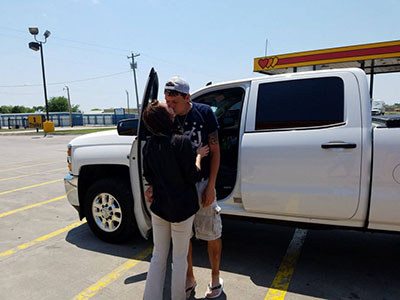 It was supposed to be an ordinary lunch break.

At least, it seemed that way to Serena Bass, Assistant Manager at Love's 274 in Okemah, Oklahoma. Then, she received a message from her boyfriend, Trey Jordan, asking her to meet him outside of the store.

She had seen Trey's truck parked outside near the diesel bay, but she thought nothing of it -- he often stopped to buy snacks or drinks or to simply drop in and say hi. But Trey's mother, Carol Martin, who works alongside Serena as a cashier, was there on her day off.

Something was going on.

Serena went outside, and surrounded by signs reading "Love's" Trey dropped down on one knee, ring in hand, and asked her to marry him. 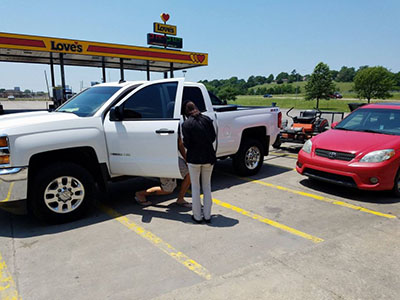 It was Trey's ultimate surprise for Serena, but it was far from his first.

Serena and Trey grew up in Okemah and had always seen each other around, but beyond that, they were strangers. That is, until Trey showed up one evening on the doorstep of Serena's new home with an unpleasant greeting.

"I'm going to ruin your night."

He was building a gazebo for a neighbor when his vehicle slipped out of gear, rolled downhill and smashed into Serena's parked car.

They stayed in touch over the next few weeks to resolve the issue, and during that time, they discovered they had more in common beyond needing to file an insurance claim.

He was an Army veteran; she grew up in a military family.

This familiarity started a friendship; the friendship evolved into romance and love and now, marriage.

Of course, just because they fell in love doesn't mean Trey got off the hook for wrecking her car.

"I still give him a hard time about it," Serena said, laughing.

As for Trey's vehicle? He tried selling it a few times, but he could never go through with it. According to Serena, there's simply too much sentimental value attached.

"It's what brought us together," she said.

Their wedding is set for September 2017. 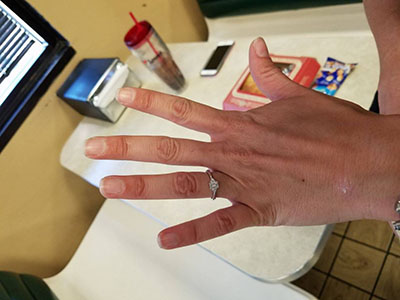