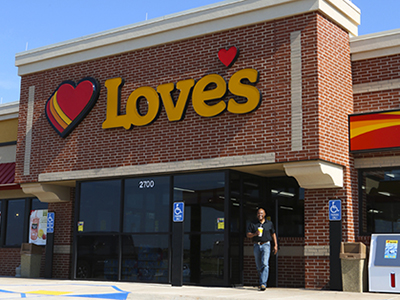 What began as an ordinary stop at Love's 309 in Aurora, Nebraska, quickly turned into a unique and frightening experience. Thanks to fast action and a little improvisation from the store's general manager, outside of being a little emotionally shaken, everyone walked away unscathed.

Rachel Lampe was in the midst of a cross-country trip with her 6-year-old daughter and Jack Russell terrier. The traveling trio pulled into Love's 309 to refuel, stretch their legs and snag some refreshments. By all accounts, the visit was the same as hundreds of Customers experience every day at Love's stores from coast to coast. That all changed as Lampe and her daughter were walking out the door.

"As I was leaving the store, I heard a very loud bang and smelled smoke," said Lampe through an email submitted to the corporate office. "Then, (I saw) the fire hanging off my arm."

The batteries in the vaporizer inside Lampe's purse malfunctioned and caused the handbag to burst into flames.

"I was in shock and terrified as you can imagine," said Lampe. "I was holding the hand of my 6-year-old (daughter). Somebody showed up and got my daughter against the building and put the fire out with my fountain drink and some water.

That somebody was Jason Davis, general manager at Love's 309. He too was sent into action by the sound of the batteries exploding.

"I heard a loud boom, almost like a gunshot," said Davis. "I ran outside and doused the flames. I didn't really think anything of it, and the whole thing was over in less than a minute."

Fortunately, no one else was in the area at the time of the fire, and the flames were extinguished before Lampe, her daughter or Davis was injured. The bad news is Lampe's wedding ring, which was in her purse, melted in the blaze. She also lost nearly $400 in cash. However, none of that seemed to concern Lampe's daughter. She was heartbroken about her mom no longer having a purse. Davis yet again had a quick solution.

"After cleaning up my mess, I needed to wash my hands and try to calm my daughter down," said Lampe. "She told Jason, 'Oh no, my mommy does not have a purse!' Exiting the washroom, that by the way was very clean, he was there, and was so concerned, and told me to get a fresh drink and no women should be without a purse. He said to pick out a new one and he would take care of the bill."

Davis explained his decision as an easy way to further resolve the situation because the daughter was still extremely upset and Lampe was clearly in shock. Lampe couldn't bring herself to accept the offer of a new purse to replace the one she lost, but Davis insisted. Lampe compromised by letting her daughter pick out a simple wallet to replace the charred purse. 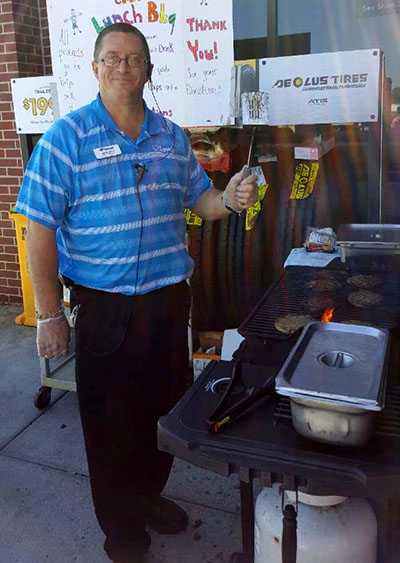 Shortly after resuming her trek, the gravity of the situation sank in for Lampe.

"Traveling alone is tough, and having my two girls with me was not easy. After I left Love's, I had to stop and just cry about how scared I was and how lucky we were. It could have happened in the car, and I can't say we would be here to tell the story."

The silver lining to this story is Lampe is here to tell it. Justin Janacek, Love's safety manager, tips his hat to Davis for helping ensure the tale had a happy ending.

"He reacted well," said Janacek. "It's all about acting fast. In an emergency situation, time is of the essence. You definitely want to extinguish the fire quickly, and he used what he had in quick access."

Janacek added advice for anyone else who might find himself or herself in a similar situation.

"Ensure the fire is away from other possible sources that may fuel the fire. Use ABC-rated fire extinguishers if time permits. If the fire is by the (fuel) pumps, make sure to trigger the emergency fuel stops. If the fire is small, get to the source and extinguish it. Only do this if it is small and controllable. If it gets too large, evacuate the area and call 911."

Let's hear it for Jason Davis. Thanks to his quick actions, a family was able to continue their trip missing some material possessions, but physically unharmed.