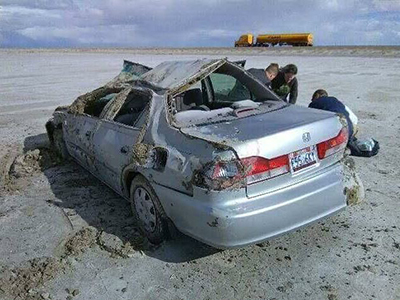 Seconds - that's all we get sometimes. That's all we get to make a decision. A decision that can alter lives. For Gemini Motor Transport driver Josue Ubico, a recent decision impacts a young man forever.

The day began like any other for Ubico. He began his shift around 7 a.m. in Salt Lake City, like it does most days in his bright yellow sleeper cab. Love's 365 in Wells, Nevada, was one of the last stops of the day.

Ubico pulled his truck over, grabbed his first aid kit and ran over to the battered car. He found a startled teenager calling 911 and another teenager pinned underneath the car. The pinned teenager was conscious and in serious pain. Ubico helped free him.

"He was responsive but in a lot of back pain. I told him to not move and stay calm," said Ubico. "I comforted him and wiped his face off until the ambulance arrived."

Ubico held the boy's neck still and talked with him for 30 minutes. The injured motorist was airlifted to a local hospital for his injuries. Ubico didn't know this at the time, but that injured motorist's name is Jordan. He is the son of Michele Hay-Gregersen, assistant restaurant manager at the soon-to-open Love's 691 in Ely, Nevada.

"It's crazy because I don't usually stop like this because paramedics beat me to it. But that day there was something in me that said I had to stop," said Ubico. "I'm not the hero though. God is the one who saved Jordan."

Keeping Jordan calm and his neck still may have prevented more serious injury or saved his life.

Hay-Gregersen reached out through social media to let us know how grateful she is.

"I'm so grateful to be a part of a team that has people like Josue," she said. "You are our hero, Josue! You are our family's angel. Thank you so much!"

A story like this doesn't shock Brent Bergevin, Vice President of Transportation.

"This is acting on instinct and just being a good citizen," said Bergevin. "This shows we're hiring the right type of human beings. They're involved in lives and the community. They care for others. They are good, solid, human beings."

Ubico is no stranger to helping others and being reliable. He's been with Gemini since 2011 and a lead driver in his region.

"It's no surprise Josue did something like this," said Joe Specchio, Gemini Regional Manager. "He is a great guy. I'm really proud to know him as a driver, co-worker and friend."

Terrific job, Josue! We are thankful for you. We wish Jordan a healthy and speedy recovery!