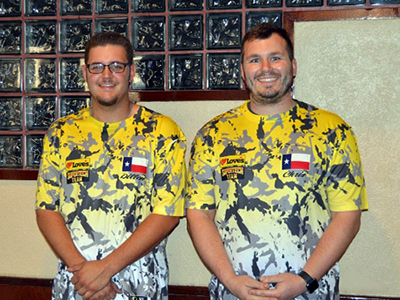 Deep in the heart of Texas live two of the best truck mechanics you'll find anywhere, and they both work for Love's Truck Tire Care. Chris Herndon, of Love's 589 in Lubbock, and Dillon Barton, of Love's 464 in Comfort, recently competed in the 2017 Texas Trucking Association (TXTA) Technician of the Year contest, and they did us proud.

According to TXTA, the contest "recognizes the contributions of outstanding technicians of the heavy duty fleet maintenance industry. The contest evaluates the technician's knowledge of his or her trade and ability to utilize that knowledge on basic mechanical problems."

Chris took fourth place statewide, and Dillon finished 11th out of only 24 mechanics chosen to compete as part of a contest that starts regionally and culminates in a written test taken by more than 200 aspiring technicians. A third-place finish for both Chris and Dillon in the written competition in May earned these Love's mechanics a trip to College Station, Texas, for the statewide meet that took place June 10.

"Neither of these mechanics had competed before in a competition like this, and they represented the Love's family with pure drive and dedication," said Love's Area Mechanic Training Manager Justin Munoz.

Munoz oversees Truck Tire Care training for Texas, Oklahoma and New Mexico, and he said contests like this are becoming quite popular. This was Love's first time to compete, he said.

"Doing well at state means bragging rights for our mechanics. We want to get our name out there, and one of the ways to do that is to compete against the best," Munoz said.

Other competitors at the TXTA contest included Peterbilt, Walmart, UPS and H-E-B Grocery.

"It opens up a lot of opportunity for tire mechanics who are competitive. Being involved in competitions like this will appeal to them, and they'll push themselves, drive themselves to be better," Munoz said.

There are competitions in 27 states, Munoz said, and Love's is working toward participating in all of them.

And the Love's team looked great competing, too! Munoz said team shirts were created for Chris and Dillon.

"When you go into a competition like this dressed for success, you're naturally going to perform better," he said. "I wanted to go in there and show off the Love's colors."

The TXTA competition tests mechanics on proper repair procedures and manufacturer regulations as set forth by the Technology & Maintenance Council, part of the American Trucking Association. So, preparing for competitions like the one in Texas means getting better and better at work that benefits Love's Customers nationwide via standards followed by the entire industry.

"Everything we're training on will not only help our mechanics at these competitions, it will help them serve our Customers better," Munoz said. 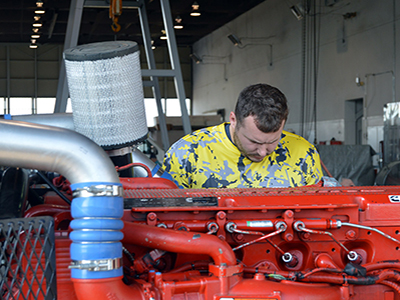 Specifically, the mechanics are tested on engines, trailer reefer, wheel-end maintenance, electrical, Hazmat DOT regulations, tires and PACCAR engines. Chris and Dillon took their own personal time, Munoz said, to study and prepare for this competition.

"Their effort really showed," Munoz said. "I'm so proud of these two technicians and how they represented the company and the family."

Chris' fourth-place finish earned him a $500 cash prize. He will also be recognized during the TXTA Annual Conference this August in Austin.