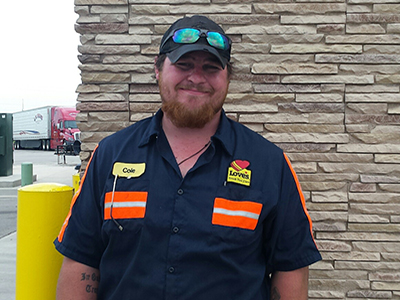 Driving late at night presents a special set of dangers. One such risk often underestimated by motorists is driving while fatigued. To make this problem worse, you don't only have to worry about it for yourself, you have to stay alert for other drivers who are sleepy behind the wheel. On a recent road call, tire care mechanic at Love's 587 in Fon du Lac, Wisconsin, Cole Schuelke came to the aid of driver after witnessing his fatigue-related crash.

Schuelke was en route to a road call at about 3 a.m. As he drove in the right lane, he noticed the driver of the vehicle slightly ahead of him in the left lane fall asleep. The car drifted out of its lane, careened through the ditch and crashed into a signpost before coming to rest on its side. Schuelke remained calm to ensure he stayed in control of the service truck.

"I started to slow down as soon as I saw him fall asleep," said Schuelke. "I didn't want to hammer the brakes because I had too much weight in the truck. I slowed down, turned around and drove back to the crash." 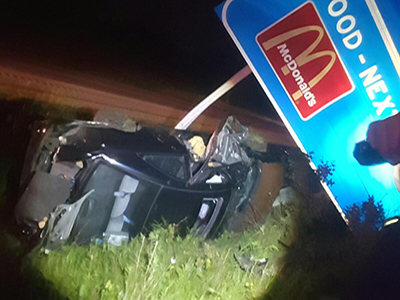 By the time Schuelke made it back to the car, the driver was standing in the road shouting for help. He had cuts on his arms and legs, but didn't appear to have any serious injuries. Schuelke called 911 and tended to the distraught traveler.

"I gave him my work coat and got him out of the road," said Schuelke. "I got him to sit down, and I wanted to stay with him at least until the cops and tow trucks got there."

It took emergency personnel about 30 minutes to arrive on scene. In total, Schuelke spent about an hour making sure the driver was OK and calm before continuing on the road call. Fortunately, the Customer understood the delay. Schuelke explained the situation, and the Customer appreciated his willingness to help.

Thank you, Cole, for being there for someone in need. You set a tremendous example by remaining calm and in control during an unexpected situation and still managed to provide top-notch service to your original Customer.