Everyone has a different set of skills gained through life experiences. Quite often, we find ways to use those abilities in other aspects of our lives. Occasionally, our knowledge relates to something we'd prefer to use as infrequently as possible. That's the case for one employee at Love's 314 in Murfreesboro, Tennessee.

Travel Stop Clerk Gaven Hale has two friends afflicted with forms of epilepsy. Over the years, he's experienced both of them having seizures as a result of the condition. Hale is accustomed to reacting to the seizures and ensuring his friends receive the attention they need to safely recover. It's safe to say, the knowledge to handle a situation like that is valuable but not a skill you ever want to use. Fortunately for one Customer at Love's 314, Hale knew what to do when he needed help.

When a Customer burst into the store and told staff his co-driver was having seizure in the lot, Hale sprang into action. It all happened so quickly, Love's 314 General Manager Kevin Mayes didn't even catch what was transpiring when one of his employees bolted from the store.

"It was the end of the day for me, and I was on my way out the door," said Mayes. "My radio was off, and I was telling my OM a few final things before I left. I thought something was wrong at the pumps - maybe someone forgot to hang up the DEF nozzle."

Moments later, an employee informed Mayes of the actual situation.

"I was floored," said Mayes. "Gaven could have called the cops and let them handle it, but he didn't. He is normally a great customer-service employee, and he did a super job helping the Customer."

When Hale arrived at the Customer, he checked for a pulse and made sure he was breathing. The driver had stopped seizing, but he was still drifting in and out of consciousness. Hale proceeded to take steps to ensure the man was in good hands. 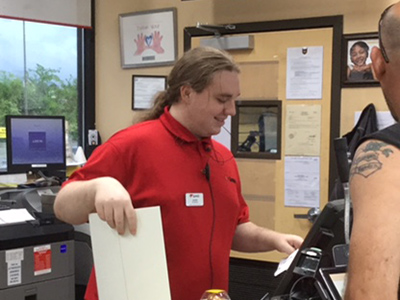 "I tried to get him onto his side, but I couldn't because of the way he was sitting," said Hale. "I wanted to make sure he was in a good position because, when you have a seizure, you can choke on part of your tongue or your saliva. While I was doing that, I called 911."

Hale tended to the Customer until paramedics arrived. After only 15-20 minutes from the time the Customer's co-driver came into the store, the ordeal was over. Speculation from the paramedics is the seizure was heat related. The Customer was treated on-site and released. Without the quick actions of Hale, the situation could have had a much worse ending.

When someone needed help, Hale trusted his instincts. He used knowledge gained outside of work when it was unexpectedly required. With the amount of traffic in and out of our stores every day, anything can happen at any time. Hale's actions illustrate the importance of staying alert and being willing to help in any way possible.

Congratulations, Gaven. Your commitment to helping your Customers regardless of the situation is appreciated.