My Vote Counts: Love's Employee Sworn in as U.S. Citizen

My Vote Counts: Love's Employee Sworn in as U.S. Citizen 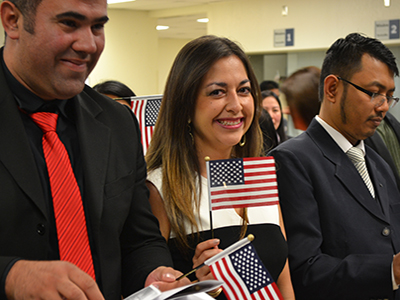 Journey to become a U.S. citizen capped off at ceremony surround by family, friends and colleagues

Diana Reynolds came to the United States from Bogota, Colombia, 17 years ago to attend school in Jonesboro, Arkansas. She learned English and began her education at Arkansas State. Reynolds earned two degrees and met the man who would become her husband. After 14 years in Jonesboro, she packed up her life and moved to Oklahoma City to begin her Love's career, but until recently, something was still missing.

Reynolds, who is the Portfolio Manager for Love's Financial, completed the process to become a permanent resident shortly after getting married. However, until she became an official citizen, there were certain things she wasn't able to do, like voting or obtaining an American passport. The process to become a legalized citizen is quite extensive and requires commitment. 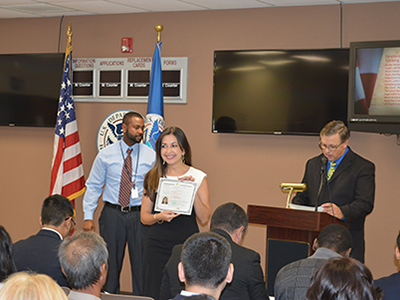 "I wanted to have my voice count," said Reynolds. "It was time for me to complete the process that would allow me to fully participate in the decisions made for the future of the country. I've lived here half of my life, so the U.S. is home to me. I could have applied for the U.S. citizenship a few years ago, but I finally sent my application in January. I had my last interview and took the citizenship test a few weeks ago. It was very interesting to see my entire file for all these years - lots of time, money and energy invested."

On Wednesday, Oct. 25, the process was officially completed. Reynolds participated in a ceremony to culminate the journey she was on to become a citizen of the United States of America. On hand to witness her accomplishment were her parents all the way from Colombia, her husband and a few unexpected guests. Members of her team set aside their duties at the office to celebrate with their colleague. 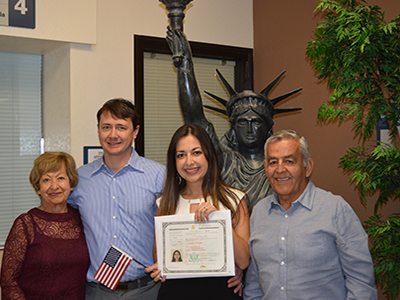 Diana Reynolds celebrates becoming a U.S. citizen with her husband and parents.

"It was a great surprise," said Reynolds. "When you spend that many hours together in a week, your co-workers become family. I think sharing this event was very special for all of us."

Reynolds wasn't the only person who appreciated the opportunity to sharing the moment.

"The management team wanted to show our support and celebrate her major accomplishment of becoming a U.S. citizen," said John Akers, Group Manager of Operations for Love's Financial. "I think it is great that she has become a citizen because she chose the U.S., unlike most of us that are citizens via birth." 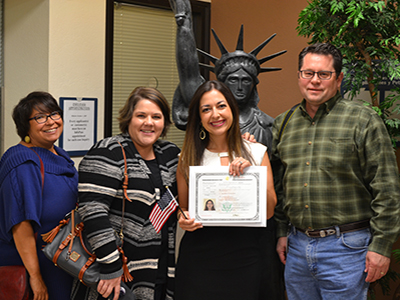 Reynolds continued the celebration by going to lunch at one of her favorite spots in Oklahoma City with her parents followed by shopping. She says she looks forward to finally being able to vote and travel with an American passport. While the journey took time, the result was worth it.

"Being a U.S. citizen is an honor," said Reynolds. "Appreciate all the wonderful things that this country has to offer, focus on what you can do to improve the current situation and don't be afraid to express love for your country."