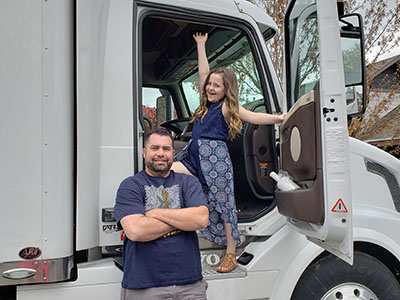 August 26-September 30, 2018, when Love's employees around the country start asking Customers to donate to Children’s Miracle Network Hospitals, they are asking to support countless kids and families around the country. This year, we're excited to share with you the story of Chloe, and her dad Jason.

Jason is a professional driver, like so many of the key Customers that give to this campaign every year. He never expected that one day this campaign would make a difference in the life of his daughter.

Join the Miles of Miracles Facebook group to see fundraising events on your route!

When Chloe was 5 year old, her body started aching. Many thought they were growing pains, but Chloe’s mother knew something more was wrong. It took visits to several doctors before one found her diagnosis: leukemia.

The news was also hard on Jason, who is on the road driving east coast to west coast routes throughout the year.

"He was heartbroken," Chloe’s mom said, "He stopped what he was doing and came home for the first couple of weeks of her treatment."

Chloe's family saw a personal connection with funds from CMN Hospitals, beyond the overarching support of Asante Rogue Regional Medical Center in Medford, Oregon. Funding from CMN Hospitals directly helped Chloe with her treatment by paying for a port for her to receive oncology treatments.

Chloe is now cancer-free because of the wonderful doctors and powerful treatment from her local CMN Hospital.

When professional drivers choose to donate to CMN, they are supporting fellow drivers like Jason who know what it's like to be on the road and have a sick kid at home.

Mark your calendars! Friday, Sept. 28-Saturday, Sept. 29 Love’s is celebrating National Coffee Day, and for every 24-oz. coffee/hot beverage or larger that is redeemed through your My Love Rewards account, Love’s donates $1 to Children’s Miracle Network Hospitals on your behalf! What’s better than free coffee for My Love Rewards members? Free coffee that gives back.

Thank you for making Miles of Miracles for the kids.