When Ken Rankin's oldest daughter shrugged at the idea of going to college, he wanted to inspire her. Rankin, a Gemini Motor Transport driver, was determined to show his daughter the value of a college degree by earning one himself.

"Having these little girls, I want them to be able to see what they can do," Rankin said.

After two years of classes and hard work, Rankin graduated Dec. 10 from Miller-Motte Technical College in Chattanooga, Tennessee, with an associate's degree in criminal justice.

"I'm still psyched about my degree," he said. "It's been great." 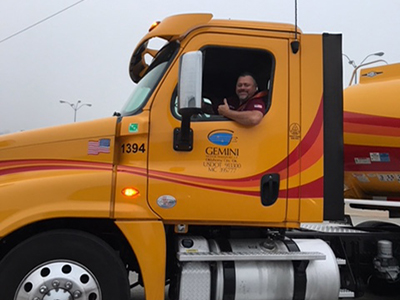 After a long shift of driving through the hills of Tennessee, you won't usually find Rankin relaxing. Instead, he's checking under his fingernails for diesel, strapping on his backpack and heading to class.

Seeking to set an example, Rankin worked with his RM to switch to a four-day work schedule, allowing him more time to focus on school. He enrolled in classes in fall 2015 and didn't take a break from school until he finished his course load in September.

He wanted the full classroom experience and opted to forego taking more convenient courses online. The college worked with his hectic schedule, making the transition from the work day to the classroom easier.

"It's tough when you go from driving and moving hoses all day to the classroom," Rankin said. "They are two worlds apart."

When he worked, Rankin would often begin his day at 2:30 a.m. Certain days required him to juggle work and school, and on his days off, he enjoyed being a student.

Rankin became a Gemini driver in April 2013 after creating a diverse career as a fuel hauler, sheriff's deputy, member of the Army National Guard and vice president of an international trade company.

Rankin's goal is to continue building his career in the years to come. He is a proud Love's employee and is grateful to the company for allowing him to work and go to school simultaneously.

"There are not a lot of companies that will do that for you," Rankin said. "Everybody was great. Everybody pulled their weight for me to do what I needed to do to go to school. I owe a lot to this company."

In January, Rankin continues his journey toward a bachelor's degree at Bethel University. Taking courses online, his goal is to graduate with his degree in emergency management in Dec. 2018. 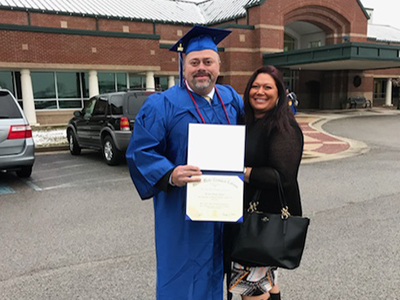 Rankin doesn't want to leave Love's when he graduates. Instead, he pictures himself working for Love's risk management in Oklahoma City. He also has aspirations to complete his master's degree in international relations.

"It's going to be hard," Rankin said. "But when it comes to business and improving my skills, I'm hard on myself."

Rankin is already emergency certified and serves as a recruiter for the Tennessee State Guard in his spare time.

As for his daughter, she has since decided to continue her education beyond high school and begins taking classes at the University of Tennessee - Chattanooga this fall.