Meet Michael McDowell, Driver of the No. 34 Love’s Ford Fusion

Meet Michael McDowell, Driver of the No. 34 Love’s Ford Fusion 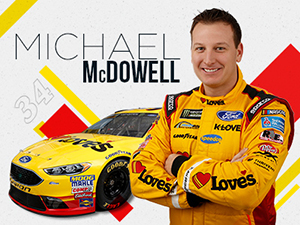 Love’s is excited to introduce the driver of the No. 34 Love's Ford Fusion for the 2018 Monster Energy NASCAR Cup Series. Michael McDowell is a NASCAR veteran and brings his 10 years of Cup Series experience to Front Row Motorsports. With Love's on board for 18 races with McDowell, you can't miss the familiar yellow and red paint scheme this season. Watch McDowell and the No. 34 Love's Ford in the season opening, the Daytona 500, Sunday, Feb. 18.

Let's get to know our new driver.

What do you love about racing?

McDowell: I love that it requires everything you have, 100 percent focus and there's no adrenaline rush like going 200 mph, side-by-side and fighting with other drivers for a position. It's the greatest thrill in the world!

What are you most looking forward to during this Monster Energy NASCAR Cup Series season?

McDowell: Trying to win a race! Every year is a new opportunity, and an opportunity to do what you've always dreamed of.

You're coming into your 11th year in the Cup Series, how has NASCAR changed in the decade?

McDowell: There's a lot that's changed and a lot that's stayed the same. It's harder now than it's ever been. The teams are even more sophisticated. The engineering has made the sport and the cars evolve a lot; the fundamentals are the same but everything has advanced.

What is your favorite racing memory?

McDowell: That's a hard one. I have a lot. The first win is big. Mine was in the Xfinity Series two years ago. Another favorite memory was definitely my first Daytona 500 start.

Where is your favorite racetrack?

McDowell: Watkins Glen because I grew up racing on road courses, and that's a really historic road course track that most champions in F1, IndyCar, NASCAR, all levels of racing have raced on.

Love's is a family-owned company, and we treat all of employees like family. How is your family part of your racing career?

McDowell: My family comes first before my racing career. My wife and I decided if I was going to do this, we were going to do it as a family, and I was not going to miss first words or first steps. I'm honoring my family and career at the same time. I have four kids, ages 8,5,4,3, and we have probably driven around 200,000 miles together.

Have you ever received a speeding ticket?

McDowell: Yes, but not in a long time. However, the last time I got one, I went to the class to keep it off my record and there were two other NASCAR drivers in the same class, which was pretty funny.

McDowell: It could vary from Snickers to an apple depending on how I've eaten that week. However, if I need pep in my step, I'll drink a Monster Rehab Energy Iced Tea.