Love's employees pride themselves on serving others, especially during the most extreme of circumstances.

That commitment to our Customers did not slow down when two major hurricanes tore through the eastern U.S. in September and October. Amidst difficult times, our team members showed they are truly Great People Who Care in their communities.

Earlier this month, as the most powerful part of Hurricane Michael was closing in on the town of Cottondale and Love's 453 in Florida's panhandle, a couple of our employees helped two professional drivers take shelter from the deadly storm.

The store was closed and all other team members had gone home for their safety, when District Manager Brad Peck and Division Merchandising Manager Matt Elder heard a knock on the door. A professional driver had walked to the store after the wind blew his truck over on the nearby interstate.

"I couldn't really run, it was so windy," said Natavius Riggins.

"He was soaking wet with his duffle bag on his shoulder," Peck said. "We brought him in and offered some coffee and a shower and let him wash and dry his clothes."

An hour later, a second driver showed up, needing help after his big rig toppled.

"Bob walked in very shaken and had scrapes on his shoulder and arms," Peck said.

The driver, Bob Willen, arrived just before the worst of the hurricane moved through Cottondale.

"We could see trees cracking like toothpicks, rain going completely sideways and the wind was howling through the cracks in the doors," Peck said.

Throughout the chaos, Peck and Elder made sure their two Customers had everything they needed.

"They went over and beyond to make sure that I was okay," said Riggins. "They even took me to the bus station afterwards so I could get home."

They are spectacular people," said Willen, an owner/operator of his truck. "I didn't normally stop at Love's before that but now I'm a lifetime Customer.

After the storm passed, more team members returned to serve the long line of Customers who flooded in as 453 reopened. Willen stayed for a while to watch the door.

"I wanted to make sure no one was ripping the store off. I wanted to repay my favor," he said.

Peck witnessed that same spirit of generosity among both employees and others in the crowded store.

"I saw people pushing cars that had flat tires, offering to let the elderly and handicapped Customers to move to the front of the lines and even paying for items that they didn't have enough money to cover," Peck said. 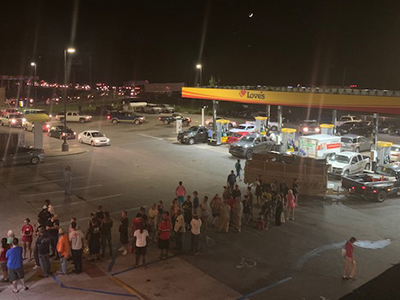 That commitment and compassion certainly could be seen across many of our stores in the path of the hurricanes.

Weeks earlier, team members at Love's 412 in Dunn, North Carolina, helped a nearby nursing home, even after Hurricane Florence knocked out the power and forced the store to close.

The man who operates the nursing home drove to the store, asking for ice.

"I found out how much he needed, bagged five bags of ice and brought it up to him, said Mike Johnson, Operations Manager. "He drops by every so often and thanks us for helping him." 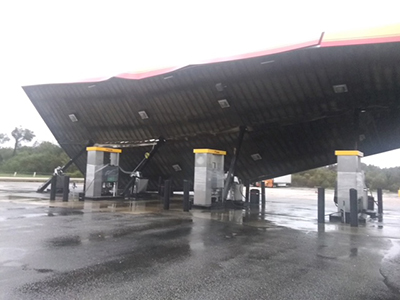 Two hundred miles away at Love's 326 in Orangeburg, South Carolina, Tire Care Mechanic James Tucker took the time to change an elderly woman's flat tire amid the rush of Customers after the store reopened.

"When (Division Director) Tony Cribb hired me, he told me I would make a difference," Tucker said, "My mom always told me 'If you can, give a helping hand.'"

Even if they weren't in the direct path of the storms, other store team members traveled to affected areas, helping in stores that saw an influx of Customers before and after the hurricanes.

While Love's 561 in Mossy Head, Florida, did not take a direct hit from Hurricane Michael, the store was extremely busy in the wake of the storm.

"The store, Subway and tire shop teams put in a lot of extra hours to take care of the Customers," said Peck.

In the aftermath of Michael, dozens of employees from other stores in the region helped at Love's 561 and 453 in Cottondale.

"We would not have been able to take care of our communities without these people and their efforts," said Peck.

A big part of helping Customers involves preparation, sometimes days before the storm arrives. Whether it's Gemini drivers stocking up stores with extra fuel or corporate support teams coordinating logistics, Love's is able to mobilize our resources when Customers need us the most. 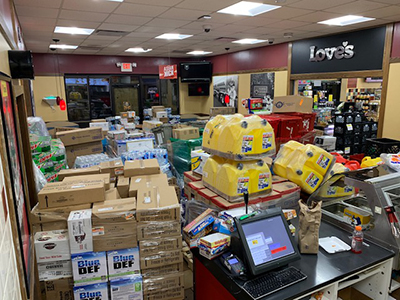 "Pushing all the assets we needed before it could get crazy was super helpful," said Justin Carter, former General Manager at Love's 326 who recently transferred to another location in North Carolina.

Store employees sacrifice a lot of their time to make sure operations continue to run as smoothly as possible. Carter recalls law enforcement reversing traffic on Interstate 26 while thousands of South Carolina residents evacuated ahead of Florence.

"I could get home from work, but getting to work was difficult," said Carter.

In normal circumstances, store managers will tell you successfully opening a location involves a lot of work. In the days before Hurricane Florence made landfall, Love's 715 opened a full 24 hours ahead of schedule to serve Customers evacuating through Bastian, Virginia.

"It gave them another option along their route to safer ground and then again on their way home," said Dustin Aker, General Manager of Love's 715.

It's our unwavering commitment to look out for each other and Customers, no matter what circumstance, that makes our employees across the Love's Family of Companies so special.

Seeing our team members on the front lines, in some cases providing life-saving help, is nothing short of inspiring," said Jenny Love Meyer, Vice President of Communications. "We truly appreciate them and thank them for looking out for Customers in any situation. 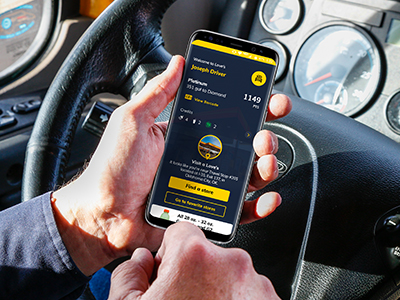