As the general manager at Love's 48 in Hennessey, Oklahoma, Kevin Clavier serves his Customers while developing leadership skills in his close-knit team. Kevin has gotten where he is today because of hard work, patience, adaptability and a bit of luck.

"You can't win the lottery if you don't play," Kevin said.

Luck was on Kevin's side in 2011 when he went to a local home goods store to buy lottery scratcher tickets. Kevin was looking for extra cash after being laid off from his job at another convenience store three months prior.

Another man was getting scratcher tickets: Scott Anthony, who at the time was the general manager of Love's 85 in Guthrie, Oklahoma. Scott, a family friend, heard about Kevin's situation and encouraged him to apply to join his team.

It wasn't long before Kevin was working with a team of Great People Who Care, across the street from the gas station where he used to work.

"Back then I was considering a career path in construction. This was just going to be a short-term job," Kevin said.

Kevin quickly proved himself as a hard worker and a mentor. His experience served him well, and he was soon promoted to assistant manager.

Managers recognized the knack Kevin had for working with people and gave him the opportunity to work in a more fast-paced environment across town. Kevin was transferred to the Love's 218, next to Interstate 35. That's where he met an unforgettable coworker: the woman who would become his wife.

With experience in a busier store, Kevin accepted a promotion to general manager back at Love's 85. However, his leadership skills were about to be put to good use outside of Oklahoma.

Kevin was asked if he would be open to transferring to Love's 39 in Syracuse, Kansas. He accepted, and the week after moving, learned his fiancée was pregnant.

Kevin spent his weekends making the seven-hour trip back to visit his wife, who was still working in Guthrie.

After a few months, Kevin accepted a new challenge in Clayton, New Mexico. He was called upon to provide stable leadership at Love's 22 after recent turnover in management at the busy store. Kevin spent two months living in a hotel.

"Once we got things turned around, and the managers trained up, the store's volume doubled," he said.

Kevin was offered a long-term position in New Mexico but instead chose to move back to Guthrie and Love's 218 to be there for his newborn baby.

His plans to get more experience in higher volume locations were put on hold due to family health issues. Kevin asked to transfer to a smaller store that would allow him to spend more time with his family during a difficult time.

"They recognized the hard work I had put in, relocating to other stores, and they were able to work with me and give me a job at Love's 48 in Hennessey," Kevin said. 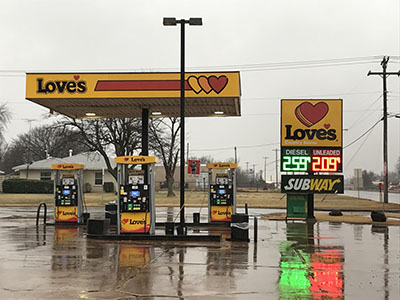 Kevin was able to foster a family feel at a store that serves a town of less than 2,300 people. He was still called upon to train managers at other stores in northwest Oklahoma.

"I would check in with my team in Hennessey, then drive over to Love's 15 in Fairview," Kevin said. "A couple months later, I would head down the road to Kingfisher to see how the new manager at Love's 5 was doing."

Kevin's hard work was recognized in 2015 when he received the Founders Club Award, an honor bestowed on managers who face challenges with a high degree of leadership.

Kevin knows there's still more to come in his career with new challenges. He's excited about the prospect of growing more leaders like himself, with the one-on-one training experiences that helped him in the beginning.

"You can't teach everybody the same way," Kevin said. "Individual time with each team member helps them learn better."

Right now, Kevin's team is looking forward to the upcoming addition of Godfather's Pizza at their location. Customers are also excited about the new option in their small town.

"When your team and store are doing great, the whole town knows," Kevin said, "and they feel better about coming in." 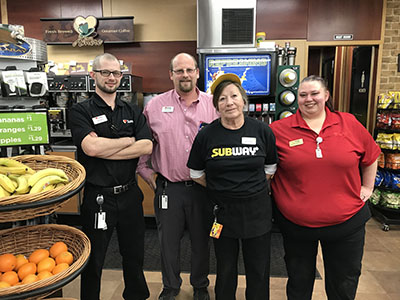