James Herring is passionate about learning new things and thinking outside of the box.

"My thought process kicks into high gear when it comes to learning new things," James said.

That passion is why he has excelled during his nine-year career at Love's. As the Tire Care manager at Love's 387 in Fair Play, South Carolina, James oversees the operations of a team of 11 to ensure Customers are getting back on the road quickly.

James' Love's career did not begin in the tire shop. In 2010, he joined the team at Love's 239 in Max Meadows, Virginia. James and his wife had just moved to town with nothing but a car, a bed and their clothes. With a baby on the way, James had to find steady work quickly.

"I called every day for two weeks, asking to interview for the job," he said. "We lived in my father's house 200 feet from the store. I told them I could always be there to help, rain, shine or two feet of snow."

His persistence paid off and James started out in the restaurants, making Subway sandwiches and cooking chicken at Chester's. After a month preparing meals, James had the opportunity to switch gears when a couple tire care technician positions became available.

"My manager told me, it's more money and more hours. I knew it would be a great decision for my growing family."

Transitioning to the tire shop meant a leap of faith for James, who had no real-world experience in this specialty.

"I took auto mechanics in school, but I didn't stick with it long," he said.

However, James proved he wanted to become an expert in this unfamiliar territory. Managers recognized his talent for motivating people, and, 10 months after transitioning to Tire Care, James was promoted to Tire Care manager.

For the next several years, James witnessed Love's Tire Care business evolve as more Customers came into the shop and services expanded to other areas of maintenance besides tires. His time in the shop came to an end for a time, when James moved back into the store to become an operations manager. 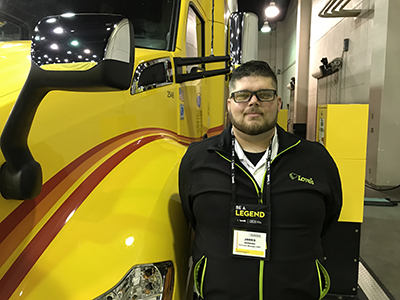 After a year getting reacquainted with the store in Max Meadows, James was called upon to help the store team as the operations manager at Love's 407 in Carlisle, Pennsylvania.

"It was our goal to get the location staffed up and ensure our team members were happy and motivated," James said.

After six months in Pennsylvania, he seized the opportunity to move back into the tire shop and relocate to our most northeastern location at Love's 611 in Canaan, New York.

"I helped our technicians jump-start the tire sales and get the shop on more of a positive note," James said.

In May 2018, James took his leadership skills to his current store at Love's 387.

"We have such a great team of experienced technicians in Fair Play, South Carolina," James said. "Coming in, my primary goal was to promote our culture and keep that talent. I'm proud to say we have several team members who have been here at least four years."

James knows he wouldn't have been able to inspire others without those who inspired him. He credits those who helped shape his experience at Love's, including the manager who first hired him, Angel Rorrer, as well as Walter Buffalow and Eric Daniels, among many others.

"They really recognized the potential in me and showed patience while I was learning the ropes," he said.

In January, James' hard work in his multiple roles over the years was recognized when he received a Founders Award at the 2019 LEAD Conference. He looks forward to seeing how his leadership can help the company for years to come.

"If you have dreams and aspirations, you'll fit in at Love's," James said. "When I started, I had no clue how to work on a truck. Now, I'm driving my team forward in the tire shop and making sure we serve our growing Customer base."

Want an evolving career like James? Visit Love's Careers and learn how you can join #TeamLoves today!