Earlier this month, catastrophic flooding across the Midwest has claimed lives and destroyed thousands of homes and businesses. The disaster has impacted three Love's locations as well as several employees and the communities they serve in Iowa and Nebraska.

"This is devastating," said Dewayne Porter, Love's district manager. "What we're seeing is a once-in-a-lifetime event in this region."

Love's 704 in Mills County, Iowa, is closed and will have to be rebuilt after water from the Missouri River overtook the store, rising more than six feet inside the location. Most employees at Love's 704 have been relocated to other stores until it can reopen.

Love's 680 in Norfolk, Nebraska, had to close for a few hours over the weekend due to rising waters but is back open and serving Customers.

Love's 631 Inventory Management Coordinator Shelby Fincher is one of at least nine Love's employees who lost her home.

"I worried about how long it's going to take for things to get back to normal," Shelby said. "I lost my house to a fire last year, so my family is starting over for a second time."

Despite the enormous setback, Shelby has continued to focus on serving Customers at Love's 631 in Valley, Nebraska, while the store was open for a limited number of hours over the weekend. She made it her mission to get to the store on Saturday, hitching a ride on a neighbor's tractor. 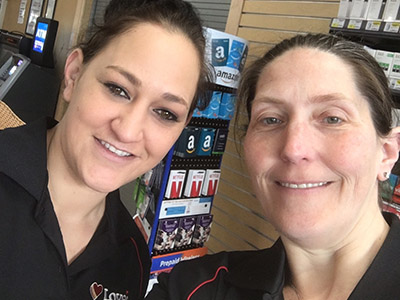 Shelby Fincher (left), and Heather Munger (right), helped keep Love's 631 open while the rest of the team members were unable to get to the store. 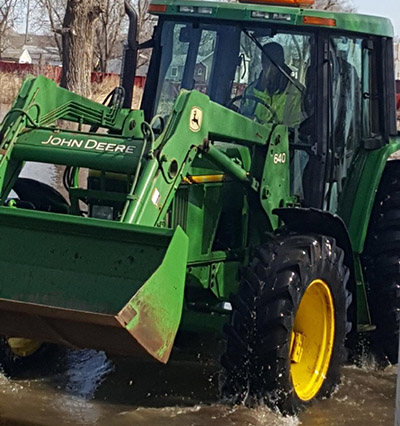 Shelby got to work by riding a neighbor's tractor.

The floodwaters cut off so much of the town only Shelby and Love's 631 Shift Leader Heather Munger were able to get to work. For three days, they ran the store by themselves, serving first responders, professional drivers who were stranded and other Customers.

"I needed that sense of normalcy from being at work," Shelby said. "It was great seeing the appreciation at the store."

Love's is helping Shelby and others affected through the Love's Employee Emergency Fund.

"What these team members are going through is heartbreaking," said Jenny Love Meyer, vice president of Communications. "First and foremost, we want to take care of our employees, and then we'll evaluate how we can support their communities during this challenging time."

Our teams nationwide continue to care for the professional drivers who are delivering resources to those affected by the historic flooding.