Amanda Wright has a passion for animals, which is why she recently embraced the opportunity to help a customer who lost his dog.

Amanda, an inventory management coordinator at Love's 473 in Texarkana, Texas, was working at the diesel desk last week, when a professional driver came to her in a panic. He had been walking his dog just outside the store when the pup bolted, breaking his leash in the process.

"The owner told me he never runs off like that," Amanda said, "I think the dog might have just smelled something interesting."

Despite the owner searching the area around the store, the pit bull, named Rocko, appeared to be long gone. However, Amanda was optimistic he would return and had the owner send her a picture of the pup and his phone number.

A few days later, another Customer drove up with Rocko, saying he had spotted the dog in the middle of the road, apparently injured from being hit by a car.

Amanda immediately called the owner, who was three hours away. While she waited for him to return to the store, she made sure Rocko wasn't seriously injured and treated him to the best canine hospitality. Amanda and the team provided the "good boy" with dog food, water and a couple hot dogs from the roller grill. Rocko also made some new friends while hanging out at the store's spacious new dog park. 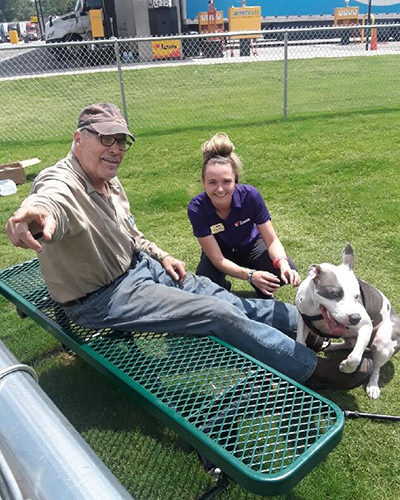 Before long, the owner drove up, much happier than when he left earlier in the week.

"The man was giddy like a kid, and Rocko was so happy to have his dad back," Amanda said. "For me, it felt amazing to make sure both of my Customers were taken care of."