Eight years ago, California native Andy Lash was looking to make a move to Oklahoma, so his wife could continue her education. With plans to leave his first full-time job after six years, he applied to work for Gemini Motor Transport as a professional refined driver in Oklahoma City. Initially, Andy was attracted to Love's because of its reputation as a great company that takes care of its employees.

"We thought, 'We'll just give it a try and move back to California if it doesn't work,'" Andy said. "Well, it's been working for eight years now."

The risk has resulted in reward as Andy has been an integral part of Gemini and Musket throughout his Love's career. In July 2010, Andy and his wife made the move to Oklahoma's capital. But before his wife could enroll in school, Love's gave Andy the opportunity to move to Eugene, Oregon, to continue working as a Professional Driver in December 2010.

As Andy put in the hard work, the opportunities to grow his Love's career were abundant.

"I've moved five times across the western-half of the U.S. in eight years to take promotions and growth opportunities," he said. "I could have only made those moves because I had faith in the company."

After two years in Oregon, Andy moved to Windsor, Colorado, to manage a crude terminal for Musket, and three months later, he was promoted to Musket's Compliance and Equipment Manager of Crude. While he still oversaw operations in the western regions off and on, after one year Andy took a job with Gemini as the Crude Regional Manager of South Texas.

"I've gotten to wear a lot of hats over the years, and the people around me have trusted me with some large challenges - like starting new businesses and markets for us," he said.

Andy has worked in more than eight states and Canada while with Love's. In his position as Crude Transportation Manager, Andy does a great deal of traveling, which offers a variety of opportunities and challenges daily.

"Each day brings some new puzzle to figure out," Andy said. "Sometimes those puzzles make the same picture, but they're still fun to put together."

Since March 2017, Andy has helped oversee all crude trucking operations throughout Texas and Oklahoma. He also works with Gemini Regional Managers to solve day-to-day problems from staffing to forecasting future growth. He's the longest running crude trucking team member, and, as a result, a fantastic resource for many on his team.

As he's grown with the company, Andy has had the opportunity to train managers and help with recruiting. He's devoted a significant amount of time in 2018 to growing the crude department, which gained about 60 employees this year alone. Even in his free time, he creates helpful safety and instructional videos as a resource for Gemini drivers.

As for his success, Andy credits the great mentors he's had to coach him and help him succeed along the way.

"I never thought eight years ago I would be where I am today," he said. "I've always just tried to do what's asked of me each day. The growth and rewards have come thanks to everything Love's and Gemini offers." 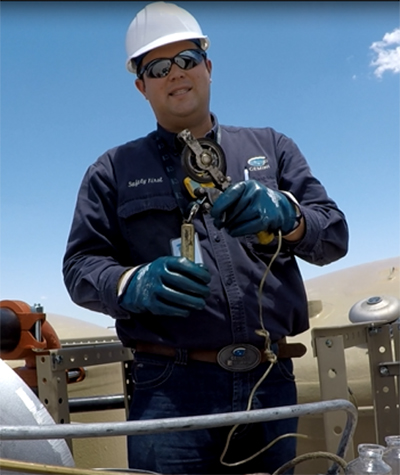