“Actually living it made me view Veterans Day differently”

A brave high school senior was forever changed by the horrific terrorist attacks on Sept. 11, 2001. Michelle Ballard – today, an affirmative action specialist at Love’s – enlisted in the United States Air Force the next day.

Being in high school did not hold her back. Ballard was part of the DEP, which means delayed enlistment program. Her Air Force recruiter would check in with Ballard once a month. She would participate in PT practice. Ballard would even help the Air Force recruiters proctor the Armed Services Vocational Aptitude Battery (ASVAB) at high schools.

The decision to enlist happened overnight, but the calling to serve in the military was present for most of her life.

“My family are proud U.S. Navy veterans, but my grandfather didn’t want his granddaughter to join the Navy because he didn’t want me on a boat with 5,000 men,” Ballard said. “I heard how well the Air Force treated their people, and how I could get the job I wanted to work with computers.”

Serving in Germany, Iraq and other places, Ballard was a communication-computer systems operator who built networks where networks didn’t exist.

Even after 10 years of service with the Air Force, Ballard says the place that changed her the most was basic training.

“Basic made me grow up,” Ballard said. “It made me realize what a responsibility I had just gotten myself into. I was 18, and I really didn’t understand the severity of it all.”

Transitioning to a Love’s career

The can-do attitude and respectfulness Ballard learned in the Air Force helped her transition well into Love’s.

“I was prepared for civilian life because I was trained to make big decisions – even life or death decisions,” Ballard said. “Not only making a decision but making the right decision. At Love’s, you are prepared to jump in and get the project done and resolve any issue that may arise.”

After years of working with veterans at Love’s, Ballard now shapes Love’s Affirmative Action program to guide how we hire veterans as a company.

Ballard knows firsthand how transitioning into civilian life can be challenging. Her advice to veterans starting their civilian job search is direct: use your resources. 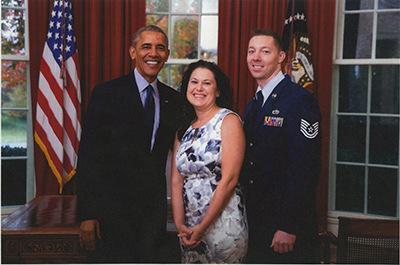 “First off, it’s going to be OK,” Ballard said. “Research how your job in the military could translate into a specific job sector. Use TAP (Transition Assistance Program) and take advantage of all the resources the military provides. They are sometimes hidden, but the resources are there.”

Each Veterans Day, Ballard revisits memories of her time in the service. She experiences Veterans Day differently than civilians.

“Actually seeing combat has changed it,” Ballard said. “Actually living it made me see Veterans Day differently. I connect with previous squadrons who are now old friends. I think about the memories. Some good, some bad and some really sad.”

It’s difficult for us civilians to convey the strongest words of gratitude on Veterans Day. In short, thank you to the men and women who have valiantly served our country.