Any chance he gets, Tony Cribb enjoys talking about the wins involving the employees he leads; whether it's business wins or personal wins. As division director for Division 1960, Cribb oversees the operations of Love's locations in nine states, from New York to South Carolina.

"I take pride in watching others grow," Cribb said. "I work to make sure we keep that family feel in my division."

Cribb's career at Love's began in 1997, when he, along with several other employees who would play a role in our company's success, left Pilot. Cribb started off as an assistant manager at a store in western Oklahoma. However, his promising career was cut short a few years later when he had to leave the company and move back to South Carolina for family reasons. 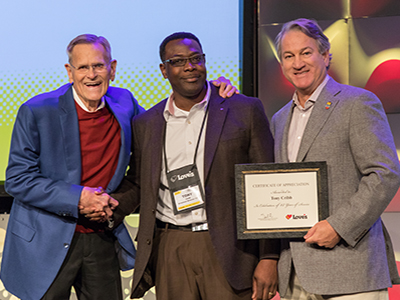 At the time, Cribb couldn't have predicted there was still plenty in store for him at Love's. When he told Tom Love about why he had to leave, Cribb remembers Tom saying they will see each other again in one year.

"Lo and behold, a year and two weeks later, my secretary at my new job told me, 'There's a gentleman looking for you.' It was Tom. He told me, 'Tony, I'm sorry I'm a little late.' I was flabbergasted."

The year was 2002 and Tom needed Cribb's help as he was looking to expand Love's territory into more states in the Southeast. Cribb accepted the offer to come back as a general manager, and he was involved in opening the first stores in Georgia and South Carolina, among others.

When the next chance of advancement presented itself, Cribb put his career growth on hold to focus on his growing family.

"I had to turn down my first promotion to district manager, because I had three babies in diapers, including twin girls," Cribb said.

The second time Cribb had a chance to be a district manager, the offer was too good to pass up. He accepted the role to oversee the new District 1922 in South Carolina knowing he could still be there for his family.

The experience of working with several store teams prepared him for his promotion to division director in July 2017.

"That first month was a little overwhelming," Cribb said. "My Vice President of Operations, Gary Price, guided me through it."

One of the first big challenges in Cribb's current role came late last summer when Hurricane Florence affected several of his stores. Thanks to his leadership and teamwork involving business units across the Love's Family of Companies, our employees served evacuees and reopened closed stores as quickly as possible.

"Seamlessly reopening a store after a storm is the biggest undertaking," Cribb said. "Recognizing the individual strengths of your employees makes that process a lot smoother."

Cribb, who has experience as a dog trainer and owns two Italian mastiffs and a shitzhu, has been able to turn his passion for pets into a valuable amenity for Customers at our travel stops. 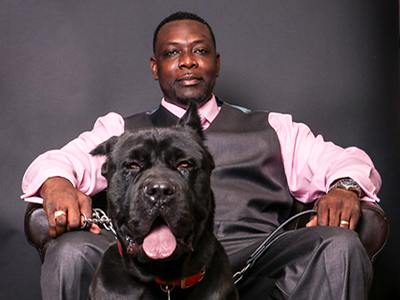 After Terry Job, a district manager in neighboring Division 1920, told him about the idea of putting in dog parks at our stores, Cribb was instrumental in developing the concept and turning it into reality at several locations.

"I know the hurdle of traveling and not being able to safely unleash your pet," Cribb said.

In addition to his experience as a dog trainer, Cribb has been an associate pastor at Spring Branch Baptist Church for nearly 10 years and preaches at various churches in the Southeast upon request. He said that experience helped prepare him as a leader.

"My faith has taught me the importance of understanding others," Cribb said, "and that we all have value in some form or shape, regardless of who we are."

Cribb has learned the recipe for success at Love's involves focusing on the daily decisions and hard work that add up to make a difference for the company.

"Be where you are. No matter what your position is, do the best job that you can and that next step in your career will come."