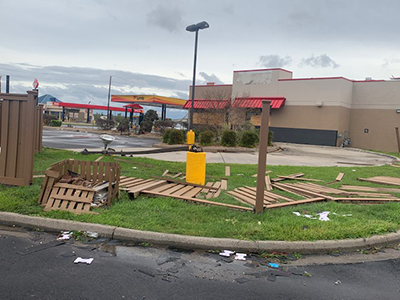 Around midnight a couple weeks ago in Duson, Louisiana, Hurricane Laura was in full effect and taking no prisoners. During the peak of the storm, Love's Shift Leader Jackie Everett and Mechanic Apprentice Greg Harris were hunkered down in Love's 523 when two professional drivers banged on the front door, begging to be let inside for shelter.

After quickly letting them in, Jackie glanced across the parking lot and noticed the drivers' trucks weren't the only vehicles on the property. There was an RV parked close to the side of the building. A couple gusts of hurricane wind and a loud crash later, Jackie and Greg both looked at each other and without saying a word, knew what had caused the sound.

"When we heard the large crash, we assumed it was the RV that had tipped. We waited until there was a break in the storm to go outside and look for what had crashed. When we peeked out the door and saw the license plate vertical, we knew what had happened," Jackie said.

As they went to investigate, Jackie and Greg found the only way of checking on anyone who might have been in the RV was through the back windshield, which was partially covered by a trailer hitched behind it. After a few hard knocks, the two saw no indication of life or evidence anyone was inside the RV, but as they went back into the store to brace for Hurricane Laura's next round, Jackie and Greg still had a bad feeling something wasn't right.

"We waited until the next break in the storm to go check the RV for a second time as we knew something wasn't right. We noticed the trailer that was initially blocking the windshield had moved a couple feet from the storm so we could see what was inside of the vehicle. Sure enough, after a few more hard knocks, a flashlight inside the RV flickered a couple times to let us know someone was trapped in there," Jackie said."

The vehicle's owner, Mr. Lamar, had been seeking refuge in the travel stops parking lot when the hurricane forced his RV over. Losing consciousness upon impact, Mr. Lamar was unable to hear Jackie and Greg bang on his windshield until the second time around, which potentially saved his life. Seeing a slight puncture in the RV's bottom window, the team decided they were going to kick in the glass and pull the driver to safety.

"We kicked in the RV's bottom window and placed towels around the edges to keep Mr. Lamar from being cut from the glass. After pulling him out we immediately took him inside to warm up and make sure he was okay," Jackie said.

Mr. Lamar had suffered minor glass damage in his feet but remained mostly unscathed from the crash. After cleaning his feet off and supplying him with fresh, dry clothes from the store, the team waited till 7 a.m. for an emergency vehicle to reach the store and check for a possible concussion. A couple hours later, Mr. Lamar was deemed to be healthy and concussion free.

"Mr. Lamar had his brother and mother pick him up from our location and take him home safely. We're just glad we found him when we did," Jackie said.