Ingredients for success: Area food manager shares career journey and importance of stepping out of your comfort zone

When it comes to his favorite part of his job, the answer is a no brainer for Area Food Manager Victor Fuentes-Alvarez – the opportunity to mentor team members and develop the leaders of tomorrow.

“When I’m talking to our Food Service employees, I’m always looking for that potential. I ask about their career goals and what I can do to help,” he said.

After nearly 20 years at Love’s, Victor continues to make an immeasurable impact, facilitating the family culture and getting his teams excited about the business and company goals.

Victor had already worked his way up from being a dish washer, to serving as a district manager at a couple fast-food chains before applying for an opening at Love’s in 2003.

“I spent $10 to buy an American Online (AOL) disk for the internet and I always say that’s the best $10 I ever spent because I got online and found a job listing at Love’s,” Victor said. 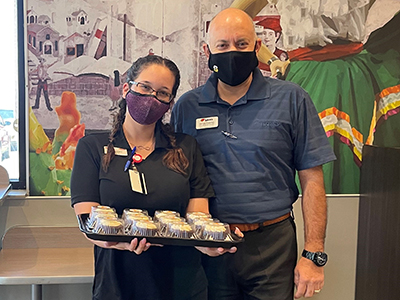 Thanks to his experience, Victor was hired on the spot and hit the ground running as the Arby’s restaurant manager at Love’s 223 in Ripon, California. It didn’t take long for leaders to recognize his potential for leading teams on a larger scale, and nine months later Victor accepted a promotion to area restaurant manager.

Before long, a new opportunity came up for a district manager role, which for Victor was a valuable lesson in trust and stepping out of his comfort zone.

“It took some convincing for me to say ‘yes’ to this offer because I had only ever known the world of food service. The travel stop side of the business wasn’t as familiar so I wasn’t sure I could be successful in the role,” Victor said.

However, after encouragement and a couple months of training, Victor was ready to lead multiple store teams. Even with his newfound confidence, his passion for food service never went away and in 2010 he returned to an area restaurant manager role during a series of organizational changes to help scale the company for the future.

Victor currently oversees restaurants and deli programs at more than 50 locations across the Southwest and also serves as Love’s brand ambassador for Arby’s.

Victor encourages team members to think past the mindset of, ‘Oh, that’s not my job.’ For him, cross training is vital - it allows teams to be more flexible when the unexpected happens and build vital skillsets more easily.

When it comes to becoming an effective leader at Love’s, Victor’s recipe includes three important ingredients – being approachable so your team members are more likely to open up to you, being clear that communication is a two-way street and leading by example by showing you’re not above doing the work.

Even after decades in food service, Victor is still learning something new every day and challenging himself to best support his teams and Love’s customers. When it comes to future career opportunities, especially in Food Service, the sky’s the limit.

“The one regret I have about my career is I wish I had found Love’s at a much earlier age. It’s amazing working for a company I love so much that I have no reason to update my resume. I’ll retire from Love’s, but there’s so much opportunity for me ahead,” he said.

If you’re interested in a career at Love’s, visit jobs.loves.com