Love’s General Manager Tryston F. was attending Texas A&M University when he started looking for a part-time job. When he applied at Love’s to be a cashier, he assumed it would be a great, but temporary, stint working in a travel stop.

Tryston shifted gears and made a career for himself when he began seeing Love’s in a different light. For him, Love’s became a place to continuously grow, learn and support his family.

After working as a cashier for a year at Love’s 327 in Kingsville, Texas, Tryston took on a new challenge, accepting the role of tire technician.

“During my time in the tire shop, my manager, really laid the groundwork of leadership for me,” said Tryston. 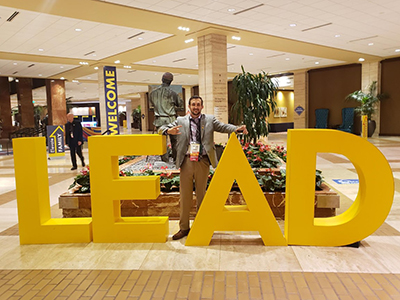 When his manager pursued the next step in his career, Tryston was encouraged to throw his name in the ring to lead the shop.

“That was when I started thinking of my job at Love’s as a career,” said Tryston. “I started talking to my managers and paying attention to the industry. I realized Love’s is the spot to be.”

With Tryston as a truck care manager, his shop had zero percent turnover for 12 months. The next step on his career ladder was operations manager, where Tryston and his team made the location a great environment to train upcoming leaders at Love's".Tryston is now the general manager of Love’s 342 in Three Rivers, Texas. Starting out as a travel stop cashier and working his way up to general manager, he knows what it’s like to be in the shoes of his team members.

“I try to be a lead from the front guy,” Tryston said. “I show my team I’m not going to ask them to do something I wouldn’t be willing to do myself. I think a big portion of success comes from building relationships with my team members.”

Tryston strives to be an example and show others that a job at Love’s can easily turn into a career. He, along with many of our frontline leaders, experienced this and now take ownership in showing new employees what Love’s has to offer.

“I am always trying to help others succeed the way I have. Not many people see working at a truck stop as something that could ultimately change their future, but Love’s has built the company in such a way that it very much can,” Tryston said.

At Love’s, we strive to give employees across our family of companies the opportunity to grow in their careers. To begin building a career you can excel in, visit jobs.loves.com.