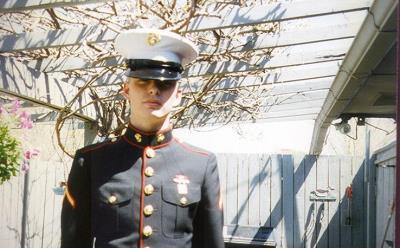 District Manager Kirk Johnson talks about his love of mechanics, his time in the Marines

Love's Travel Stops & Country Stores District Manager Kirk Johnson has always reached for the sky. He oversees seven of our locations in north Texas and has been with the company for 14 years.

His boyhood dream was to become a jet mechanic.

And this is a tale of how that boyhood dream turned into a professional opportunity of a lifetime.

Johnson is the first to mention that learning how to become a district manager for Love's has been the hardest thing he's ever done, even tougher than Marine Corps boot camp. However, it's also been one of the most rewarding, and he credits his military experience with much of his success.

"Love's structure, camaraderie and intensity is very much like the military. They are going to push you further than you knew you were capable of, and they are not going to accept less than your best," Johnson said.

Best of all, he added, Love's is going to promote and promote fast when managers show they can handle the rigors of management.

It's that same thirst for challenge that led a young Kirk Johnson to finish high school early and join the Marines at 17. At the time, however, that might have been disguised as a teenager's lack of focus.

"After graduating at 15, I was not sure about what I wanted to do with my life. My brother knew right away that the medical field was for him, and he has his PhD in anesthesia now. I think my parents started to get a little worried about my lack of focus and talked to me about joining the military at the age of 17," he said.

Johnson and his brother already had a strong work ethic instilled in them by their father, who had a psychology degree but painted houses for a living. The Johnson boys were home-schooled, and while their mother was in charge of the curriculum, their father taught history class as he painted.

"My dad wanted to be in charge of history class, so I had to read out loud onto cassette tape. He would listen while he painted, but he would stop and write questions throughout the day to test me on my retention every evening," Johnson explained.

From the age of 13, Kirk Johnson's father had he and his brother detail hour by hour what they accomplished each day as a way to measure them on time management. He had been taking his kids with him to work since Kirk was 8, and by the time he was 13, Kirk could fully prep and paint a house. 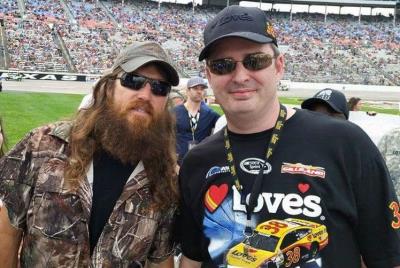 Kirk Johnson's father was driven to teach him and his brother how to work hard.

"We were not allowed to have too much time off, but I was allowed to work on my car. He considered that shop class. By the time I was 15, I had my first show car, a 1973 Volkswagen Beetle," he said.

Yet when it was time to pick a branch of the military to join, it came down to brotherhood.

"I chose the Marine Corps because of how the recruiter spoke of the camaraderie. He talked about how we were a band of brothers, Semper Fi and once a Marine, always a Marine," Johnson said. "It was exactly what I needed at that point in my life."

And he signed up for an extra year so that he could be a jet mechanic, always his dream job.

"With my passion for cars and mechanics, I felt like it would be a good job for me, and I signed up for an extra year so that I could be guaranteed the job," Johnson said.

By the end of his five years, 1995 to 2000, Johnson could tear down, rebuild and test jet engines. He thought jet mechanics would be his career, but finding a jet mechanics gig proved difficult since he didn't have his airframe and powerplant (A&P) license.

"So, my plan was to get a job in management and continue working towards my A&P license," he said.

That management position came about at Love's Travel Stops & Country Stores in early 2001, roughly seven months before the tragedy of Sept. 11 happened. Kirk started as an operations manager at Love's 283 in Rockwall, Texas.

"But a lot of airlines were going out of business, and it made me much more serious about my career with Love's because it didn't look like being a jet mechanic was in my future," Johnson said.

He quickly realized that the structure required of him as a Love's manager was similar to what he knew in the military. So, Johnson developed a system for success.

"At Love's, if you can stay on your task list while at the same time keeping people on theirs, you've got it made," he said. "I think the military does a good job of getting people to accept information without questioning too much. So, if I was told that breaks start at 10, that's what I did. If I was told to do counts with my manager at 4 p.m., that's what I did. I didn't overthink systems, and it turned out that they worked better than anything I would have dreamed up on my own."

"I think that simply having the discipline to do the programs exactly the way Love's wanted me to and by doing them 100 percent correctly, I was very successful," Johnson said.

Love's Travel Stops & Country Stores is committed to hiring veterans and helping those who serve our country get on the "road to success" after their service is done. Kirk's story isn't the only one we've told. Here are some other veterans-related stories we've published in the past year.

And if you're already convinced and ready to embark on a tremendous professional opportunity, come visit us at http://jobs.loves.com.