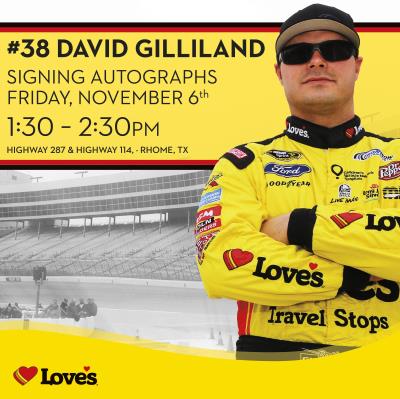 David Gilliland has only two more races this season in the No. 38 Love's Ford, but race fans have one special opportunity to meet their favorite NASCAR driver.

His best finish was 15th back in 2008, but Gilly says it's one of his favorite tracks.

"It's been one of my favorite race tracks since I've come to the Cup Series. It's got some character with the bump over the tunnel, and it's just a fun track and one of the fastest that we go to," Gilliland said.

He added that it drives really fast and reminds him of Charlotte.

"We learned some things at Charlotte a few weeks ago that I think are going to really help us at Texas," Gilliland said.

We're excited for a big race at beautiful Texas Motor Speedway, a venue that's close to our corporate offices in Oklahoma City. We invite all race fans to come out on Friday and visit with Gilly!