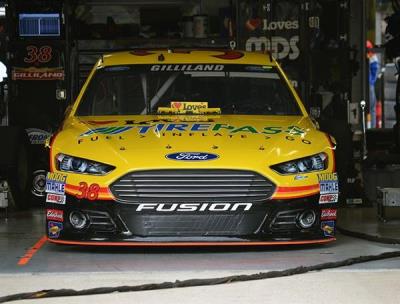 Boy, the NASCAR season sure does fly by. We're down to the final race for 2015 in the Love's Travel Stops Ford as David Gilliland and his Front Row Motorsports team head out to Phoenix for the Quicken Loans Race for Heroes 500 on Sunday.

And it's already been a wonderful weekend for Gilly. His 15-year-old son, Todd, won the NASCAR K&N Pro Series race on Thursday night. How about that!

"A lot of people from the West Coast who supported me when I was getting started racing are going to be there supporting Todd," he said.

Phoenix has always been a family affair for the Gillilands.

"I love racing at Phoenix. It's kind of a home track for me. Growing up watching my dad race, I spent a lot of time out there, and I've got a lot of friends and family out there. And I love the racetrack. It's different. It's not your average, typical oval. Turns 1 and 2 are different than 3 and 4, and then you've got the dogleg in the back. It's very unique, but it's a lot of fun," Gilliland said.

This will be Gilly's 19th Sprint Cup start at Phoenix International Raceway, where he has one Top 15 and two Top 20 finishes. His best finish at Phoenix was 15th in 2008.