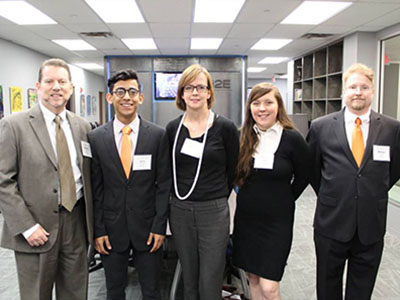 The four OSU-OKC students who compose Team "RoamTec" at this year's Love's Entrepreneur's Cup, presented by Innovation to Enterprise (i2E), Inc. and sponsored by Love's Travel Stops & Country Stores, didn't know each other before the competition began last fall. But in a few short months, they developed a concept, product and presentation in hopes of winning a statewide competition.

Michael Berry, Jerry Gramajo, Jennifer Knight and Cait Chapman are Team "RoamTec," and they conceptualized and produced a product called mobiVolt, a charging device that uses wireless connectivity to charge other devices untethered. They presented their product to a panel of Oklahoma City business leaders as part of the Love's Entrepreneur's Cup, formerly known as the Donald W. Reynolds Governor's Cup -- a business competition for college students across the state.

Awards for teams in high-growth and small-business divisions will be handed out at the Chevy Bricktown Events Center Thursday night with winning teams moving on to a regional competition in Las Vegas later this year.

Each of the students has different long-term goals, but they each have the entrepreneurial bug, a desire to create something from nothing and see it through to fruition. It's similar to what Tom and Judy Love started 53 years ago in Watonga, Oklahoma, with the opening of their first filling station. Entrepreneurship is a key component of Love's culture even today.

Berry wants to use his programming skills to better the world at large. Knight has a passion for public health and health care. Chapman plans to become a dietetic nutritionist someday, and Gramajo wants to open a coffee shop.

However, today, they're passionate about the mobiVolt.

"I think everyone understands the frustration of having to plug their phone in," Chapman said. "They're wireless phones. Why should you be relegated to a wall when you're trying to charge them?"

The competition starts each year during the fall with a "Who Wants To Be An Entrepreneur?" session, a workshop open to college-level entrepreneurs, students and faculty who want to learn more about entrepreneurship and some basic elements of business, such as writing a business plan and presenting to investors. Teams form, and then the formal competition ramps up by February and March.

Presentation day was the culmination of a lot of work throughout the semester.

"Lots of late nights," Knight said. "I personally work, and I have kids, and I have non-profit obligations. And so a lot of 8:30, 9 and 10 -- and 6 a.m. comes really early, but you do. You just keep working on it, pushing through, and lots of emails and texts and keeping in touch, and you pull it all together little by little."

"The support of the team [was wonderful]," she said. "Even though we'd be there late at night, we would have these moments of this great momentum when we were all contributing, and we really felt that there was a great direction for the project."

Team advisor Dr. Anthony Smith said, "It's been a really good experience, and this is the pay off when they get to this point. It all comes together."

However, Berry made it a point to underscore this is only the beginning for mobiVolt.

"We just have to keep proving ourselves at each step along the way. This is one step, answering these questions, presenting our ideas and showing that we thought it through and do what we need to do," he said.

Knight provided a metaphor to piece the process together.

"With any entrepreneurial or start-up venture, it becomes passion over process, and you have enough of a passion for the end goal and the end product that it gets you through the tiring and the exhausting process of the day over day," she said. "It's almost like building little Legos, and you don't get to see the end fort until you've messed with all 100 pieces of the Legos, but it's worth it. It's a labor of love."

This is Love's first year to sponsor the Love's Entrepreneur's Cup. You can learn more at lovescup.com.