When one of the strongest hurricanes ever recorded in the Atlantic made landfall in Florida last September, it left disaster in its wake. Citizens encountered a trail of tornadoes, storm-surge flooding and evacuation orders in the hardest hit areas.

When the community needed them the most, the team at Love's 627 in Davenport, Florida, got permission to open their doors and provide shelter to community families unable to evacuate. Love's provided air mattresses to local families and kept the roller grill and coffee machine full for first responders, including the Polk County Sheriff's Office deputies. The team at Love's 627 was recently commended by the Polk County Sheriff's Office at an award ceremony on Monday, July 2.

"Being recognized made us all feel proud," said General Manager Brett Folse. "Many of the officers we served during that time are people we see on a daily basis and know by name.  It was well worth the effort and, except for the Hurricane, we made the stay fun."

Folse, along with IM Coordinator Christina Heath and Clerk Rich Melson, stayed two nights at the store to not only make food and drinks available, but also to keep two of the fuel pumps open for first responders. Love's 627 was the only place open and selling fuel in the county.

"You learned that Polk County Sheriff's Office Deputies were working long days and nights to help citizens within the county during the storm and in the days that followed with clean-up efforts, many of them also without power at their own homes," said Sheriff Grady Judd in a letter to Love's 627. "Your management team opened your establishment and provided over 6,000 gallons of fuel to the law enforcement community serving the citizens of Polk County."

Folse made it clear providing fuel to first responders and getting them back on the road quickly was a team effort. He was quick to recognize Gemini's professional drivers who worked hard to make sure the location had a steady fuel supply.

"I want to make sure the Gemini drivers get their due recognition," Folse said. "We were the only station within miles to have fuel before, during and immediately after the storm. We could nothave done it if they had not delivered the fuel."

Thank you, Love's 627 and Gemini, for being Great People Who Care and stepping up to serve your community when they needed you most. 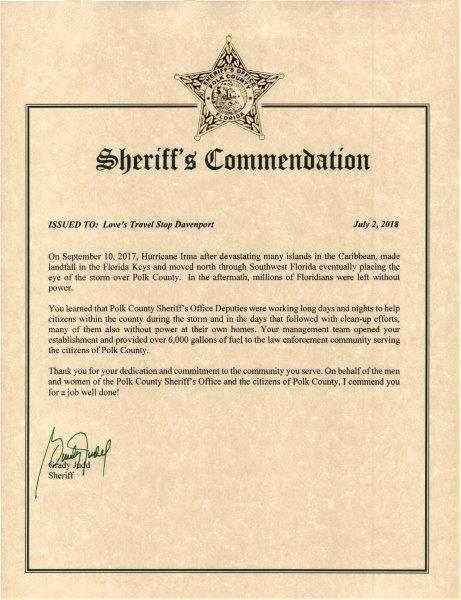 Being recognized made us all feel proud. Many of the officers we served during that time are people we see on a daily basis and know by name.