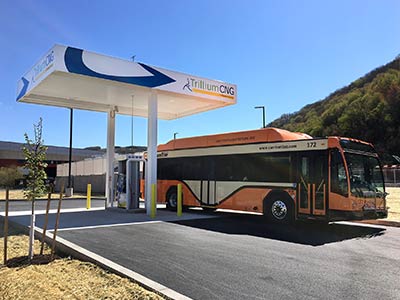 The facility is the first of 29 new CNG stations Love’s Trillium CNG will design, build and maintain for numerous transit authorities in Pennsylvania as part of a public-private partnership (P-3) contract PennDOT awarded to the company last year. The P-3 project will provide CNG to more than 1,600 buses at transit agencies across Pennsylvania, including six at the CamTran location. CamTran currently has three CNG buses and three more are being ordered.

“When the Bureau of Public Transportation (BPT) launched its P-3 CNG public-private fueling station project, CamTran was ready. With the strong support of State Representative Bryan Barbin, the CamTran Board of Directors, and the business community, we jumped first in line! This project has already had a very positive impact on the local economy using local contractors to help construct the CNG fueling stations. CamTran is proud to be a partner with the BPT as the ‘FIRST Go Live’ CNG public-private fueling station in Pennsylvania,” said Rose M. Lucey-Noll, executive director for CamTran. “We look forward to significant fuel and maintenance cost savings, and helping to improve the air quality in Cambria County as we transition the CamTran fleet to CNG buses.”

The station, located at 502 Maple Avenue in Johnstown, is open 24/7 and features two CNG dispensers. It will primarily serve CamTran’s fleet of CNG buses, but it’s also open to the public, including light-, medium- and heavy-duty trucks. Six of the 29 facilities in the P-3 project will be open to the public.

“We are pleased to have worked with Trillium CNG on bringing the first CNG fueling station under our P-3 arrangement to CamTran in Johnstown,” said Toby Fauver, PennDOT’s deputy secretary for multimodal transportation. “This innovative program will mean savings for transit agencies and eventually for other private customers as we take advantage of the plentiful natural gas supplies being developed in Pennsylvania.”

According to the Alternative Fuels Data Center, the new CNG stations will increase the number of public CNG facilities in Pennsylvania to 52. The public fueling stations will be strategically placed throughout the commonwealth to give fleets and motorists convenient access to more CNG locations.

“It’s exciting to see our first station open up for this project. I can’t thank our partners at PennDOT and CamTran enough for their collaboration in this endeavor,” Bill Zobel, vice president of business development and marketing for Trillium CNG, said at the ribbon cutting. “We’re all playing an important role in promoting CNG as an alternative fuel, and together, we’re changing the face of transportation in Pennsylvania and in the United States by providing fleets and motorists with more places to fill with CNG.”