Love's Field is expected to open for the 2024 season

The company has pledged $9 million toward the project and also extended a challenge to other donors. It will match every other donation dollar for dollar up to an additional $3 million dollars as part of project fundraising. Once fulfilled, the match will result in a total gift of $12 million from Love's, which is the largest philanthropic gift directed toward a female-specific sports program in OU Athletics history.

Love's Travel Stops is headquartered in Oklahoma City. The company opened its first location in 1964 in Watonga, Oklahoma, and now has over 560 locations and 33,000 employees in 41 states.

"As life-long Oklahomans, investing in the community, specifically the University of Oklahoma and its softball program, is something we're proud to do," said Jenny Love Meyer, chief culture officer and executive vice president of Love's. "What Patty Gasso has accomplished in not only her tenure at OU, but for women's college softball, is awe-inspiring. The program she's built aligns with Love's core values of integrity, perseverance and strong work ethic, and the world was able to see that as they won the 2021 Women's College World Series. We are proud to have our name associated with this program and the new stadium that's so well deserved by the team." 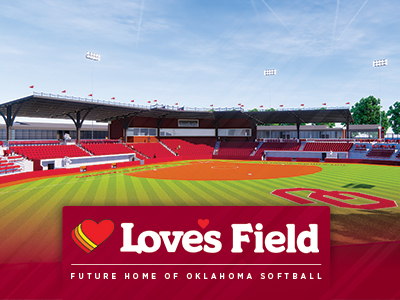 "This transformative gift from Love's Travel Stops turns our dream of building a best-in-class softball facility at the University of Oklahoma into a reality," said Harroz. "What a fitting tribute to Patty Gasso's remarkable run of five national and 20 conference championships. She defines excellence and is a critical part of the heartbeat of our university. Not surprisingly, that success has drawn a passionate fanbase, and this exceptional donation catapults the momentum of OU Softball even higher. Many future generations of student-athletes and Sooner fans will be impacted by the generosity of our friends at Love's, and we are remarkably grateful for their support."

According to OU Vice President and Athletics Director Joe Castiglione, this gift is particularly gratifying to come from a company that aligns so well with the university and athletics department.

"Love's has made a gift of historical proportions for a facility that will be second to none and will impact the lives of our student-athletes for generations to come," Castiglione said. "We are profoundly grateful. Love's is one of Oklahoma's greatest companies and families. It is an honor to be aligned with them. We share their values of pressing into the future with new ideas, of capturing the opportunities each day brings, and understanding the vital role we play in our community and state. We are proud that their name will be on our new stadium, and we are grateful that the accomplishments of Patty Gasso, her staff and student-athletes are being celebrated in this way. This program develops young women and achieves in a way that should be magnified as elite in all of college athletics."

OU Softball Head Coach Patty Gasso is thrilled about what the new facility means to her program, but said the bigger impact is an empowerment of women's athletics.

"I can't put into words how grateful I am and our program is for the generosity of Love's Travel Stops and the Love family," Gasso said. "They share our championship mindset and have embraced not only the success of our program, but the culture we've built among our student-athletes and fans. They also recognize that for us to maintain the level of excellence we've achieved, we must be a national leader in all aspects of our program, including our facility. Love's is empowering women to reach the absolute pinnacle of achievement while inspiring the next generation to look to the future with the biggest dream. As we see at a moment like this, dreams really do come true."

Gasso has been Oklahoma's softball coach for the last 27 seasons and transformed the program into a national powerhouse. Her record during that time is 1,335-341-2, a winning percentage of .792, the highest among coaches with at least 1,000 games coached. In conference play, Gasso's teams are 362-87.

Under her guidance, OU has won five national championships, including the 2021 title, and 20 conference championships including the last nine regular seasons and last four post-season tournament crowns. While turning out 69 All-Americans and three national players of the year, the Sooners have been ranked among the nations top 25 for 375 consecutive weeks. OU is the only program to be ranked in every week of the National Fastpitch Softball Coaches Poll which began in 1995.

Gasso was inducted into the NFCA Hall of Fame in 2012 and has been named conference coach of the year 13 times, including the last nine in a row. She and her staff have received NFCA National Coaching Staff of the Year honors four times.

Love's Field will be the new home to champions with aligning state of the art training facilities for OU Softball student-athletes and coaches. The new facility includes a 10,500 square-foot indoor training facility, which is nearly double the size of the current training space, and several team spaces including a training room, locker room and classroom. It also has space for a recognition area to showcase national championships, All-Americans and other outstanding accomplishments.

Love's Field will be constructed at the northwest corner of South Jenkins Avenue and Imhoff Road, approximately one-half mile south of the current stadium location. It will accommodate seating for 3,000 and is being designed to allow for expansion. The current stadium has a seating capacity of 1,378. Temporary seating is added annually to increase the capacity to approximately 1,900.

Parking will be at the existing paved lot at the Lloyd Noble Center, which is across the street to the south of the new site.

In terms of other fan amenities, Love's Field will include three concessions stands with a total of eight points of sale, with additional space for auxiliary locations. It also includes an increase of more than 80 restroom fixtures from the current facility.

Minimum estimates for Love's Field currently stand at approximately $27 million. To date more than $20 million has been raised through the generosity of Sooner Club members. Love's Field is expected to be fully funded by direct private support making it the most ever privately fundraised for a female student-athlete facility in intercollegiate sport. Architects and facility planners are completing design concepts. Groundbreaking will likely occur in 2022. It is expected that the stadium will open for the 2024 season.

Those who are interested in giving to the softball project should contact the Sooner Club at (405) 325-8000 or visit TheSoonerClub.com/softball.