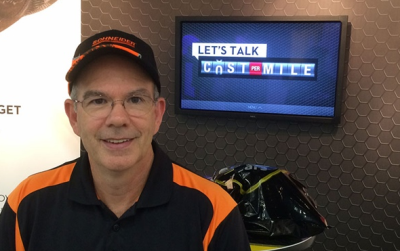 It was a boyhood dream for young Jay Hull to drive one of the "big trucks," as a he put it. However, decades later, it's an honor beyond appropriate description to be driving the truck he is today.

The Green Bay, Wisconsin, resident is the 2015 Schneider Ride of Pride driver, and he leads a rolling tribute to the men and women of the military. Ride of Pride is a program that has existed since 2001, the brainchild of an employee with Freightliner Trucks who wanted to honor veterans. Each year, Freightliner awards a trucking company the honor of getting to drive the special truck, and Schneider has been honored nine times.

Hull was a perfect choice to drive this year's edition. He's a retired Army veteran, and he spent part of his 24-year career in the military driving 5- and 10-ton cargo trucks. Back then, it only required a chauffeur's license, he pointed out to us at the Great American Trucking Show in Dallas.

"It's an honor that really can't be described," he said.

Hull got his Ride of Pride truck in May and led the annual Rolling Thunder rally on Memorial Day weekend. He drove in another Rolling Thunder event that culminated at West Point, and he drives the truck to V.A. hospitals and nursing homes, anywhere there are veterans to recognize and honor.

This December, Hull will lead a 20-truck convoy that goes from Maine to Washington, D.C., to lay wreaths at Arlington National Ceremony. Each day, a Gold Star Mother (a mother who has lost a son or daughter in the service of the United States), will ride along with Hull.

After a year on the Ride of Pride circuit, these trucks are put into freight service. Long before a board of 12 people chose Hull to drive the 2015 edition of this truck, he drove a post-circuit version of the Ride of Pride from 2008.

However, Hull has long been a fan of Love's Travel Stops & Country Stores, and he especially loves the free refills on drinks as a member of the My Love Rewards program.

"This stuff saves me money on the road," he said.

That just happens to be the theme of what we're doing here at the 2015 edition of GATS, in Booth #12131. We are saving you on your #CostPerMile. To learn more on how Love's can do that in a multitude of ways, click here.