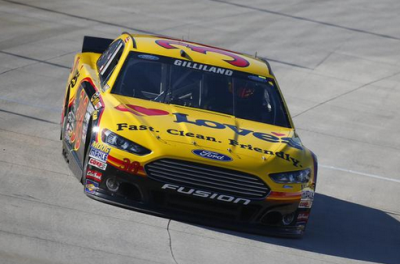 It's the second time around for Front Row Motorsports driver David Gilliland at Pocono this season, and Gilly is looking forward to being back in the Love's 38 Ford Fusion.

However, there's always something different about the Pocono Raceway, also known as the Tricky Triangle.

"Every time we go to Pocono for the second time, you feel like you just left. But the temperature's different and the track dries different. But I think this time it will be different because I think they're going to do something with the whoops in the tunnel turn. So, that will make it different. But we'll still be shifting, and I like that. I think we learned a lot from the first Pocono race that we'll take back and apply to our Love's Travel Stops Ford and be better this weekend," Gilliland said.

For any of you who might be near the Pocono Mountains this weekend, Gilly will participate in a youth autograph session for Pocono campers 14 and under from 3 to 3:30 p.m. on Friday at the Infield Block Party Stage.

And for anybody who would like to learn more about a special VIP Experience with David Gilliland later this year in Kansas, click here. We've got two ways for you to win!