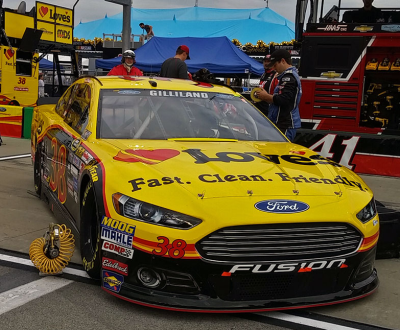 Every driver at this weekend's Quaker State 400 was adjusting to the new rules package established by NASCAR, and that includes David Gilliland in the Love's 38.

He finished 29th on Saturday night at Kentucky Speedway, but said he was "proud of the effort."

"That was the closest we've been with our setup at Kentucky," Gilly said. "It was a challenge already with the new rules package and a lot of our practice and qualifying time getting rained out. But Donnie (Wingo) and the guys had us in decent shape. We just had to keep working on it as the night went on."

"It wasn't as high a finish as we wanted for our Love's Travel Stops team, but we definitely made some progress with what we had," Gilliland said.

Gilly's next NASCAR appearance in the Love's 38 will be August 2 in the Pennsylvania 400 at Pocono Raceway. Photos are courtesy of Front Row Motorsports.