Sun sets on another NASCAR season for David Gilliland

Sun sets on another NASCAR season for David Gilliland 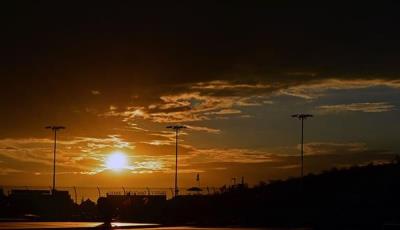 The NASCAR season starts on the East Coast (Daytona), and for the No. 38 Love's Travel Stops Ford, it ends pretty close to the West Coast. Front Row Motorsportsdriver David Gilliland wrapped up the year in yellow with a 30th place finish at the Quicken Loans Race for Heroes 500 in Phoenix on Sunday.

"We just fought tightness all weekend, and we had a little bit of an issue with the brakes," Gilly said. "The whole day was a challenge, waiting out the rain and racing at night, which no one was planning on. But the guys adjusted well and made the best of the situation."

And that initial rain delay lasted seven hours. The race was eventually called after 219 of its 312 laps.

While Gilliland and the Front Row Motorsports team finish out the NASCAR season in Miami, the Phoenix race was the final contest this season in the No. 38 Love's Travel Stops Ford. And what a season it's been!!

Remember when Gilly finished 11th at Daytona to start the season?

And then followed it up with a Top 25 finish in Atlanta?

By the end of March, Gilly was celebrating his 300th Sprint Cup race, a short-track delight in Martinsville.

At the time he said this:

"Wow, 300 Cup starts for me this weekend. It sure doesn't seem like I've had 300 starts. It's gone by fast. But I'm proud of that, and proud of being here for that long," Gilly said. "That makes it a special weekend. I'm glad Love's Travel Stops is on our car to help mark the milestone. The last couple races we've run at Martinsville have been our best races at that track. So, hopefully that trend continues this week."

In April, Gilliland made a stop at Love's 281 in Fort Worth, Texas, to greet his fans who came to town for the Duck Commander 500 at the Texas Motor Speedway, and we have the photos to prove it!

The end of May brought Love's and the Front Row Motorsports team a tremendous honor as crew member Charles "Wahoo" Sampson selected "The Unknown Soldier" as the official honoree for Gilliland at the Coca-Cola 600, annually run on Memorial Day weekend.

The road course in Sonoma called Gilly's name in late June, and then so did the barrier wall! Ouch! Thankfully, Gilly was a-ok after that big impact. We still have the video if you missed it this summer. Sorry, Gilly!!

For the second consecutive year, a Children's Miracle Network Hospitals "Miracle Child" stole the show at a Chicagoland NASCAR race. Jack Benjamin created some special artwork for the hood of Gilly's car and helmet.

The onset of autumn gave the Love's Travel Stops crew a chance to make sure several of our locations had plenty of racing jackets for the final two months of the season. We posted this list of 43 Love's stores where you can get a Gilliland jacket!

And finally, the Love's 38 Ford got a makeover of sorts with this new TirePass-themed paint scheme just in time for the Hollywood Casino 400 at Kansas Speedway.

We hope you enjoyed the season as much as we did, and we hope you'll make it a point to visit our blog each and every week for more news, notes and interesting stories from the Love's corporate newsroom in Oklahoma City.