Great day for Gilly ends in green-flag crash at Talladega

Great day for Gilly ends in green-flag crash at Talladega 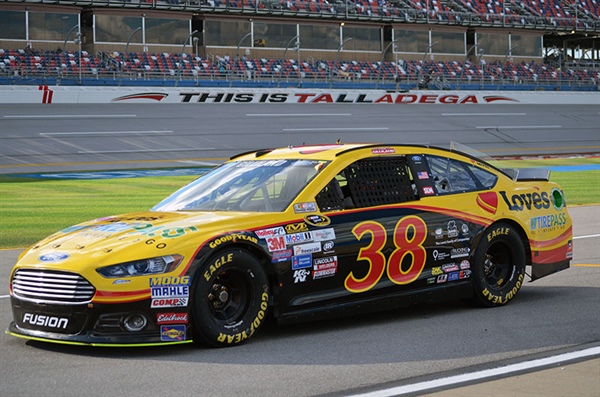 Talladega giveth, and Talladega taketh away.

Front Row Motorsports driver David Gilliland had a terrific day going at the CampingWorld.com 500 on Sunday before a wreck at the very end in a green-white-checkered finish sent him back to 32nd. Joey Logano won the race and advanced the Chase for the Sprint Cup along with Carl Edwards, Jeff Gordon, Brad Keselowski, Kyle Busch, Kurt Busch, Kevin Harvick and Martin Truex Jr.

However, it was still a good day for Gilly!

"Our Love's Travel Stops Ford was great. Donnie (Wingo) and the guys gave us a really fast car. We were able to run in the Top 10, Top 5 and even led some laps. We definitely had a shot at a really good finish until things got really jacked up in that green-white-checkered finish," he said.

But that's the nature of Talladega, Gilliland added.

"It's really too bad. A lot of good cars got wrecked on the last green-flag lap, including ours. That's Talladega for you," he said.

Gilly's next appearance in the No. 38 Love's Ford comes on November 8 at Texas Motor Speedway.