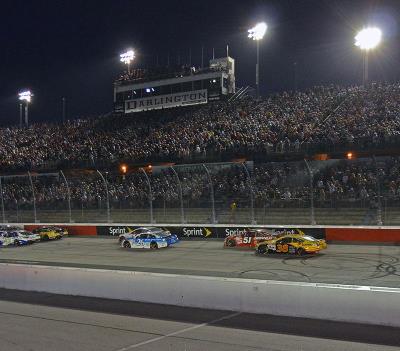 The track deemed "too tough to tame" will be host to the Bojangles' Southern 500this weekend and the #38 Love's Ford.

NASCAR and Front Row Motorsports driver David Gilliland is excited for the challenge.

"It's tough. Darlington is probably the most challenging racetrack I've ever raced on, but it's fun. I talked to some of the guys that did the tire test down there, and they said there is a lot of fall-off and the track is aging, and it's getting back more to the old Darlington," he said.

Darlington Raceway has been around since 1950, and the oval has a distinct shape with the turns on one end of it much closer to each other than on the other. This article details why Darlington is called "The Track Too Tough To Tame."

"We've had some run-ins with the 'Lady in Black' before," Gilly said.

That's right. Darlington is a track with so much character that it has two nicknames. And this article details why it's called that!

However, Gilliland said he thinks driving the Love's car this week might be the trick to a successful run at Darlington.

"We're going with our Love's Travel Stops Ford this time. It has hearts on the paint scheme, so hopefully (the Lady in Black) will like that and be nice to us," he said.

Gilly has eight Sprint Cup starts at Darlington Raceway, including his best finish (20th) in 2008.