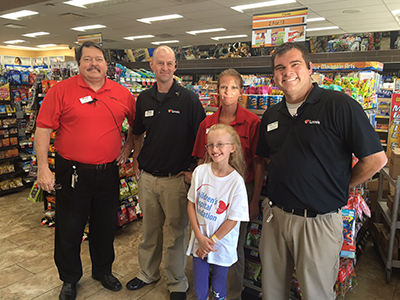 Every year, the CMN Hospitals campaign is a huge undertaking. Preparation begins in the spring when stores start organizing fundraising events, Love's corporate office begins sending out communications about the fundraiser and plans on how to inform our Customers start to take shape. Part of that last point includes reaching out to news outlets nationwide to ask them to help spread the word to their readers and viewers. It's a lot of work, but it's worth it. The beauty of CMN Hospitals is that all of the money raised locally stays in that community to help sick and injured children.

With the help of our Customers and employees at more than 390 stores in 40 states, Love's raised a record $2.53 million for CMN Hospitals during the 2016 campaign. While we couldn't have done it without the hard work of our employees, and the generosity of our Customers, we also want to thank the dozens of news outlets who helped us get the word out about our campaign!

Another favorite came from the Albany (New York) Times Union. Shannon Fromma included Love's in her story about promotions for National Coffee Day, Today is National Coffee Day: Deals at Dunkin' Stewart's, Cumberland, McDonald's and more. This year, Love's participated in National Coffee day by donating $1 of every 24 oz. coffee or cappuccino to CMN Hospitals. It was great to see Love's promotion mentioned alongside several other ones.

Overdrive Magazine's, Matt Cole posted Love's to raise money for Children's Miracle Network Hospitals just before the start of the campaign. Matt embedded a video highlighting the story of Bernie Burns, the general manager at Love's 346 in Columbia, Tennessee, whose daughter was treated at a CMN Hospital. By the way, Bernie's store raised nearly $80,000 this year, which was more than any other Love's location!

Karen Blackledge with The Danville (Pennsylvania) News wrote a great story about one of our more creative fundraising events, Pro wrestlers coming to Danville to fight for miracle. Love's 324 in Mifflinville, Pennsylvania, organized a professional wrestling tournament.

KODE-TV out of Joplin, Missouri, had a touching interview with the general manager of Love's 282 in Joplin, Love's in Joplin raises money for CMN. Bob Davis shares a personal story that drives his passion for raising money.

Andrew Freeman with KXII-TV did a great report on events taking place at Love's 266 in Ardmore, Oklahoma, Local travel stop seeks to raise money for kids. A local Miracle Child who receives treatment at OU Children's Hospital, the local CMN Hospitals affiliate, shared her story with Customers, and the reporter, that helped bring in donations.