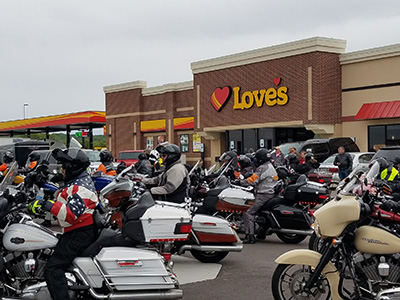 May 13, nearly 2,000 motorcyclists hit the open road for the 23rd anniversary Kyle Petty Charity Ride Across America! They are raising funds and awareness for Victory Junction – a camp created by NASCAR's Petty family to enrich the lives of children with chronic or life-threatening illnesses. Love’s Travel Stops is proud to partner with the organization as a supporting fuel sponsor.

The Ride rolled into to Love’s 445 in Sioux Falls at 10 a.m. Thursday and was greeted with smiles and cheers. Jason Kooiker, general manager at Love’s 445, shared the firsthand account of the exciting store visit.

“Customers were lined up outside the store for at least 20 minutes before the Ride showed up,” Kooiker said. “The staff and I were excited for the arrival – a lot of the crew are NASCAR fans.”

The Ride appreciated the ease of service at Love’s 445 and felt it was a hassle-free pit-stop experience. The local news captured the action, too.

Love’s 445 was equally as thankful for the hourlong visit.

“We feel honored and privileged they stopped at our store,” Kooiker said. “Kyle (Petty) is a really nice and personal guy. I’m a huge football fan, too, so meeting Herschel Walker was amazing.”

Love’s team members even caught a photo with Petty. Come on, look at all those smiles.

Our team at Love's 637 in Poynette was ecstatic about the group's visit. "The King" himself even showed up. NASCAR legend and Kyle Petty's father, Richard Petty, made an appearance at Love's 637. Check out some photos from the Poynette stop.

“It was awesome,” said Todd Kellett,  general manager at Love’s 637. “There were probably 75 people waiting throughout the store, in the lot, in Hardees. Even though the lobby was packed, everyone was smiling and having a good time.”

Riders finish the charity trip in Milwaukee May 19. Love's was delighted to be part of the Ride.