When LaShan Wiley began her Love's career 17 years ago, she never expected to still be here today. LaShan has witnessed a major expansion of the business, and her career has transformed alongside Love's as she has discovered a passion for helping people.

"I just feel like I'm part of something bigger with the way the company has grown to serve more Customers," LaShan said. 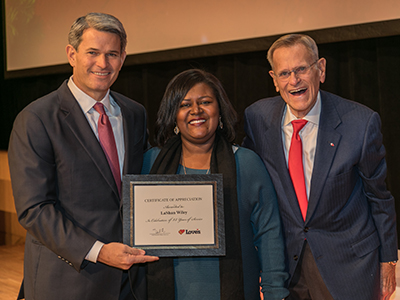 LaShan was recognized for her 15 years of service at Love's in 2016.

As the Manager of Benefits, LaShan plays a vital part in ensuring employees have competitive insurance coverage. She and her team research benefits options, propose them to company leaders, then coordinate the open enrollment process.

LaShan has Store Licensing Coordinator Rhona Freeman to thank for getting her foot in the door at Love's. Back in 2001, LaShan worked at a bank in Oklahoma City when a coworker left to work for Freeman at Love's.

LaShan was also looking to make a career move and her friend recommended LaShan for an Auditor position. She got the job, and several short months later, LaShan transferred to a different department as a Payroll Administrator before taking on more responsibilities as Payroll Supervisor.

During her time in payroll, LaShan credits her manager, Tracey Patterson with helping her realize how her role affected people's livelihoods.

"I knew if I got something wrong, an employee wasn't going to get paid that week," LaShan said. "I had to make sure I was on point every week. I think that held me accountable for projects that were in front of me once I moved to the benefits team."

Today, LaShan is blessed to have talented and dedicated team members, Supervisor of Benefits Kortnee Halvorson and Benefits Analyst Laura Potter, whom she considers her "right hand and left hand." 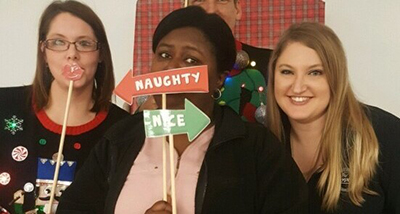 LaShan also credits her mentor, Carl Martincich, Vice President of Human Resources and Risk Management, with helping her develop professionally. One of the most important lessons she has learned is there is always room to grow and learn more.

"Even though you think you know everything about what you do, there are people around you who will motivate you to challenge yourself and help you get to where you're going," LaShan said.

LaShan was motivated to further her education early on. While at Love's, she earned two degrees: an associate's degree in management from Oklahoma State University-Oklahoma City and a bachelor's degree in human resources from the University of Central Oklahoma.

Love's commitment to bettering our communities inspired LaShan to give back. In August, LaShan became a board member of the Urban League of Greater Oklahoma City, a United Way partner agency that works to improve the lives of minorities and those in poverty.

"I'm really looking forward to getting Love's involved in the career paths of some of the youth here who normally wouldn't get the opportunity just because of their living conditions," LaShan said.

As Love's has grown, LaShan has witnessed a growth of diversity to better reflect the Customers we serve every day.

"It has been exciting to watch," LaShan said. "When I started, I could count the number of minority employees in the corporate office. That is not the case today."

When she is not at work, LaShan is focused on the success of her two daughters. Not only has her interpersonal development helped her flourish in her career; learning the importance of patience, humility and gratitude has helped LaShan be a better mother.

"This place has really taught me about stability, growth, working hard and seeing the fruits of your labor."