Lewis Taylor loves sports and the opportunity to lead whatever team he's on to success. As a district manager overseeing seven Love's locations in Oklahoma, he supports his store teams while monitoring expectations for success.

"Every day, I coach people on how to be better leaders in our stores," Lewis said. "I want to be a role model and jump in whenever help is needed."

Lewis joined the Love's team in early 2016, armed with years of experience leading employees in the fast-food industry. He was living in Wichita, Kansas, when he applied to join a team of Great People Who Care.

"I was working myself into the ground financially," Lewis said. "I told my wife Love's might present a better opportunity for our family for work-life balance."

Lewis was hired on the spot as an operations manager at Love's 608 in McPherson, Kansas, and hit the ground running. Within two months, he stepped up to lead the store when the general manager had to run the restaurant. 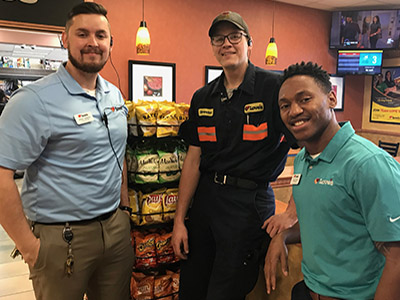 Lewis would answer the call many times over the next year to help lead teams in several stores, including the Missouri locations in Joplin, Neosho, Eagleville and Harrisonville, which he helped open. Lewis also helped open the store in Floyd, Iowa, before he officially became a general manager to lead the team at Love's 361 in Newton, Iowa.

"I was kind of jumping around to different places as an operations manager, so it was nice to be recognized with a promotion and my own store," Lewis said.

Lewis is forever thankful to his wife, Nae, for supporting him throughout his constant traveling early in his Love's career.

When he was first hired, Lewis set a goal to become the youngest district manager at the company by the time he was 28. He reached that goal in January 2019, at the age of 26. Lewis embraced the challenge to lead a group of stores in the newly created District 1958.

Lewis admits the biggest difference from his previous experience in fast food is the diversity of employees he leads. Previously, most of his employees were teenagers.

"I learned quickly that managing people here is different," he said. "Working with employees older than me, I've been able to command that respect and trust by relating to them and seeing things from their perspective." 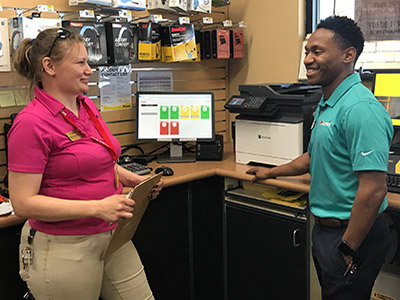 Lewis wouldn't be where he is today without the support of store leaders who helped him along the way, including Dan Phillips, who was a big influence on Lewis when he first joined Love's; John Wallace, who helped him learn how to manage different situations with employees; and Matt Edwards, who prepared Lewis to lead as a district manager.

As a young African-American man, Lewis is proud to be a role model and inspire others to pursue management positions in the company.

"The color of your skin doesn't matter," Lewis said. "What Love's is most concerned about is whether you have what it takes to be a leader. I want to be that flagship to help others like me understand they can do it, too."

Lewis is thankful for the opportunity to grow his career at Love's for years to come.

"Love's has taken care of us, both myself and my wife," Lewis said. "The experience has been amazing."

Check out open jobs with Love's!