Teamwork, respect and willingness to learn set Love’s recruiter up for success

Teamwork, respect and willingness to learn set Love’s recruiter up for success

Having the right people in the right positions is vital as the company continues to grow. Love’s recruiter Randy Hamilton's journey is a perfect example of how Love's identifies what employees are passionate about and placing them in the right roles to succeed.

When Randy was transferred to Houston in 2003, he had no idea the move would lead to a career with Love's. At the time of the transfer, he was enjoying working for another travel center company, and the idea of relocating from Phoenix to Houston was nothing strange to the St. Louis native. Randy and his family had moved multiple times and were very familiar with packing up and relocating to another state.

Randy picked up right where he left off in Phoenix. He helped open a new travel center in Houston and was successful in multiple roles with the company. A few years after his move to Houston, Love's purchased competitor locations, one of which Randy was managing. Fortunately for him, his work ethic and knowledge about the industry meant there was an opportunity to keep managing his store despite the Love's takeover.

Randy admitted he was skeptical about working for Love's initially because he enjoyed his role at the other company.

"I wasn't excited about the change at first. I was happy at the travel center, and it was a good company. However, I had a sweet deal where I could work for Love's for six months and return to the other company if Love's didn't work out," Randy said.

Nine years later, Randy is still at Love's and continues to make an impact.

"I always give any company I'm working for my full commitment because that's how I take care of my family. I committed to Love's during that trial period, and nine years later, I couldn't imagine not being here."

Randy stayed in Baytown, Texas, located in Houston and continued to serve as a Love's general store manager. He thrived in his role.

His experience working in the industry and his passion for teamwork and respect for others played a big role in his success as general store manager. Randy supported his district manager in helping train new managers. He mentored employees in his store and district, and he assisted in every possible role available in the field and spread his knowledge throughout the region. 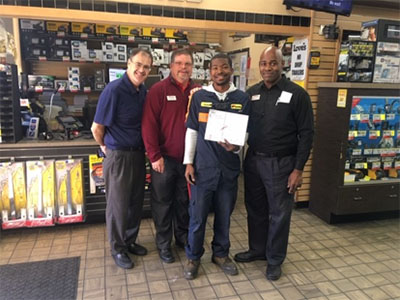 Randy helping recognize one of his team members in Houston.

"I've always been a team guy interested in learning about every aspect of the company. I tend to be successful when I work in a team environment, and my goal has always been to help the entire company grow and not just the location where I work."

Randy's willingness to share his operations knowledge, his ability to wear multiple hats and his passion to impact the company made him a frontrunner for a field recruiter position at Love's corporate offices.

"When you hire employees in the field, they usually want to know what day-to-day operations look like. I knew it would be really easy for me to tell them exactly what it's like and how they will be challenged because I have been in that position."

Randy applied and was offered the job as a field recruiter in January 2019, and just as he had done many times before, he packed up and moved for the 18th time.

Randy credited the seamless transition into his new role to mentors and his new recruiting team. 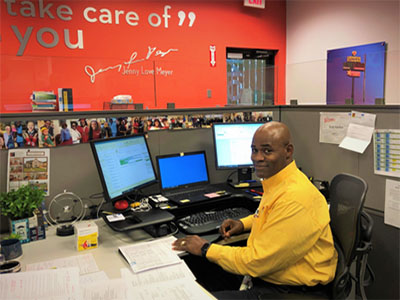 Randy applied and was offered the job as a recruiter in January 2019.

"The recruiting team had a big influence on me and helped me through the transition. My supervisor, Brandon Luiszer, and my mentor, Jay Williams, set me up for success and gave me a good understanding of how to be successful in the role."

Today, Randy is using the knowledge he acquired in the field to recruit the best employees for Speedco and Love's Truck Tire Care locations.

There are many aspects of the role Randy enjoys, but he reiterated throughout his story that his favorite part about being a recruiter is learning, working with a team and connecting people to Love's.

"The favorite part for me is learning and working with a team. I also enjoy traveling to interview people across the country, learning what they are passionate about, and trying to imagine how they can possibly come help continue to make our company successful."


Randy was full of praise for the Love's culture and its family atmosphere.

Even though Randy's enthusiasm for the company and his role is unmatched, he was equally as passionate about life outside of work. He loves sports, spending time with his daughter and his wife of 35 years.

Randy has been successful at Love's because of his work ethic and his desire to positively impact the company. "It takes ingenuity, consistency, learning, giving respect and working with others to be successful. For me, it's all about working as a team. Together, everyone achieves more."