The brutally cold weather that hit much of the U.S. in mid-February left many dealing with extreme circumstances, and our locations were not immune. The power and water may have been out at some stores, but our team members continued to persevere. Here are a few compliments sent by our customers and team members showing how dedicated we are to what we do.

A customer named Tammy Bowman let us know how a team member saved the day for her and her family at our location in Searcy, Arkansas. Tammy's vehicle got stuck in ice while trying to exit the parking lot. Operations Manager Nate Arndt and his team worked tirelessly to get Tammy back on the road. The entire team continued to work hard throughout the severe weather event and got their customers back on the road safely and quickly. 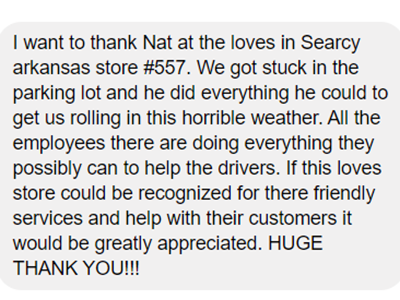 Truck Care mechanic apprentice at Love's 266 in Ardmore, Oklahoma, steps up to help a stranded driver

Our team members weren't the only ones who powered through the snow and ice to get the job done. Professional drivers across the country drove through freezing temperatures to make sure their loads and the goods we all rely on are delivered. But what happens when that truck has trouble on the road, especially in unsafe weather conditions? One professional driver was lucky enough that Nathan Ross, a truck care mechanic apprentice, volunteered to go on a 12-hour road call to Duncan, Oklahoma. Nathan has previous experience as a professional driver and knew he was better equipped in this type of weather than most to make it to the stranded roadside service driver. Nathan made the journey and got the driver moving again thanks to his selfless attitude and commitment to the customer. 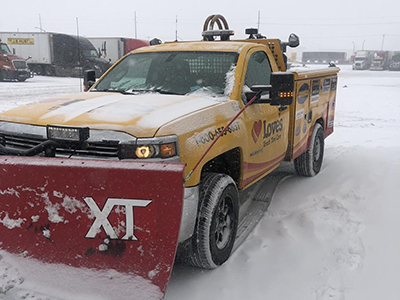 Throughout the storm, our Denton location experienced rolling outages that left them without power for up to an hour at a time. General Manager Greg Coates and Restaurant Manager Judy Hines rallied their teams through the event. During the short periods of time when the store had power, some of the team would reboot the systems while the rest prepped food and coffee for customers. When the power went off again, Love's team members would guide customers to the restrooms with flashlights and clean the store. They continued this rigorous routine for a total of five days, but never stopped taking care of their customers and each other.

Michael and his lineman crew had worked 18 hours restoring power to homes and businesses in the Houston area. Due to widespread power outages in the area, most stores had been forced to close, leaving Michael and his team without many options for a quick bite to eat. When they stopped at the local Love's in Katy, Texas, the team members there didn't hesitate to offer drinks and snacks for Michael and his crew. They offered up whatever they needed free of charge, because that's what Love's highway hospitality is all about. 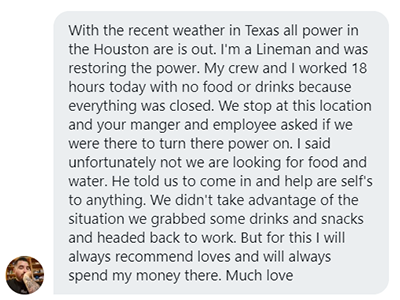