Giving is Central to Love's Culture


Love’s Travel Stops & Country Stores provides support to 501 (c)(3) nonprofits whose reach extends across Oklahoma and beyond. In addition to donations made to local organizations such as the United Way of Central Oklahoma and the Oklahoma City Boathouse Foundation, Love’s is proud to contribute to national organizations such as Teach for America and Operation Homefront, among others. Love's also supports institutions of higher education such as the University of Oklahoma, Oklahoma State University, the University of Central Oklahoma, Oklahoma City University and Langston University.

Each Love's location nationwide donates a part of its budget to the local nonprofit of its choice -- and at new store openings, Love's presents a check to a local charity during a ribbon cutting event in partnership with the local Chamber of Commerce. Giving generously is at the core of Love's culture because the organization values the communities in which its Customer and Team Members live and work.

Being generous with time and labor is vital as well. Whether it's tutoring local students or volunteering at area food banks or the local Boys & Girls Clubs, Love's employees stay active in their communities. Volunteerism is a key component of how Love's develops leaders both at its corporate offices in Oklahoma City and at its stores nationwide.

Love's is also longtime supporters of Truckers Against Trafficking and its efforts against human trafficking.


Love’s issues monetary or in-kind donations to organizations that meet the following criteria:

Love’s does not make contributions to the following:

All requests must be submitted online and all applications must be completed in full. We no longer accept requests via phone or mail. Please allow 30 to 45 days for processing your request.

If your request meets these guidelines, please click below to fill out an online request form.

Apply for a Grant Finish or View My Application 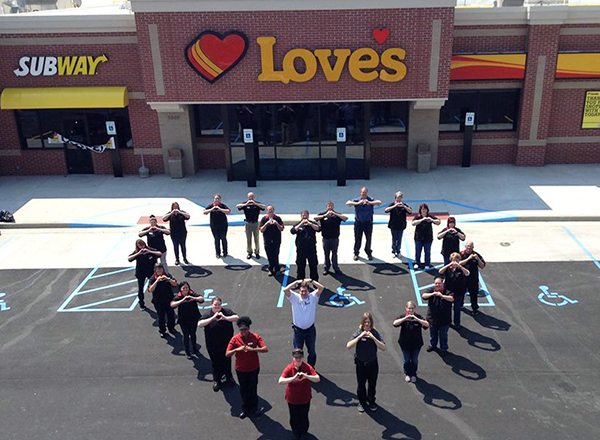