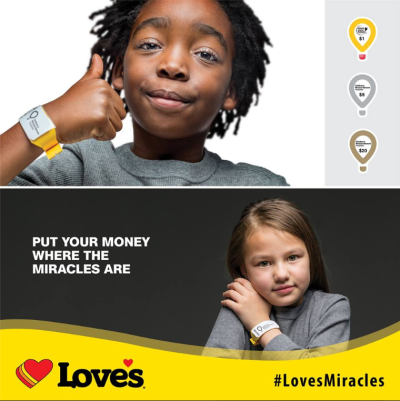 OKLAHOMA CITY, October 14, 2014 – Love’s generous and dedicated customers donated $1.86 million throughout the company’s annual five-week drive to raise money for Children’s Miracle Network Hospitals. More than 330 Love’s stores in 39 states raised more money this year than ever before, bringing Love’s total contribution over the past 16 years to more than $12 million.

“We have fantastic customers who prove their loyalty every year during this campaign to raise money for sick and injured children and we’re grateful for their continued benevolence,” said Jenny Love Meyer, vice president of communications for Love’s. “We’re also proud of our countless employees who maintain their regular duties while planning fundraisers for this great cause. Our customers and employees helped us surpass our initial $1.7 million goal for the store campaign.”

During the campaign that ended September 30, Love’s team members sold CMN Hospitals’ Miracle Balloons for donations and organized grassroots fundraising events for their communities like golf tournaments, bake sales, cookouts and music concerts. Some brave-hearted managers even shaved their heads, arranged mascot Olympics, and sat in dunk tanks to motivate their teams to raise money.

“It’s the compassion and dedication shown by each and every Love’s employee that continually makes their annual campaign a success,” said John Lauck, president and CEO of Children’s Miracle Network Hospitals. “We are grateful for all the employees and customers who opened their hearts to help make miracles happen in their own communities.”

Additional donations came in through events held at Love’s corporate office in Oklahoma City, including CMN Hospitals’ Miracle Marathon, a partner golf tournament and more, which raised more than $250,000 dollars. Musket Corp., a trading and distribution firm included in the Love’s Family of Companies, raised nearly $240,000 for CMN Hospitals at an event earlier this year, bringing Love’s total 2014 projected contribution to $2.5 million.

Founded in 1964 by Tom Love, Love’s Travel Stops & Country Stores is headquartered in Oklahoma City, Okla., and remains entirely family-owned and operated. With more than 330 locations and more than 200 Love’s a Tire Care centers in 39 states, Love’s approximate growth rate is 20 stores per year. Love’s is currently ranked No. 9 on Forbes Magazine’s annual listing of America’s Largest Private Companies. To learn more, go to www.loves.com, Facebook (www.facebook.com/lovestravelstops), or follow @LovesTravelStop on Twitter.


Children’s Miracle Network Hospitals® raises funds and awareness for 170 member hospitals that provide 32 million treatments each year to kids across the U.S. and Canada. Donations stay local to fund critical treatments and healthcare services, pediatric medical equipment and charitable care. Since 1983, Children’s Miracle Network Hospitals has raised more than $5 billion, most of it $1 at a time through the charity's Miracle Balloon icon. Its various fundraising partners and programs support the nonprofit’s mission to save and improve the lives of as many children as possible. Find out why children’s hospitals need community support, identify your member hospital and learn how you can Put Your Money Where the Miracles Are, at CMNHospitals.org and facebook.com/CMNHospitals