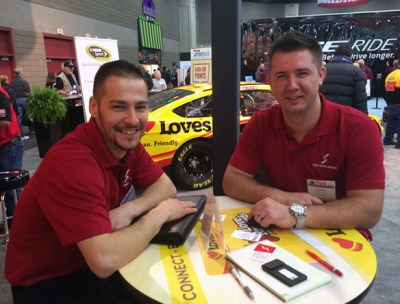 When professional drivers need to get truck repair help or to find parts, there is one resource online that dominates like no other: Find Truck Service.

Love's Truck Tire Care is proud to have its locations included in this directory, which was started in 2007 and relaunched in 2010. The entrepreneur behind this effort is a Chicagoland resident named Amer Avdic, who stopped by the Love's booth (#19080) at the Mid-America Trucking Show in Louisville, Kentucky, this week.

From a blog perspective, we were already familiar with Find Truck Service as a force on social media because they're often our most consistent content advocates, sharing Love's content on Twitter regularly. It was great to put a face with a name and meet the mind behind the business.

Avdic was with his brother, Faruk, both of whom came to America from Bosnia in 1996. Their father was a truck driver, and Amer immediately took to all-things-mechanical.

"I always had a big interest in doing things with my hands. I wanted to be a mechanic," he said.

And a diesel mechanic he became. Avdic opened his own roadside service in Chicago.

"We were always the first call," he said.

However, Avdic had a dream of providing a bigger service to more professional drivers in an area that went far beyond Chicago.

"My goal was to make that accessible to drivers nationwide," he said.

So, by the latter part of the 2000s, Avdic moved his focus from his roadside service business to the directory, a directory that will serve up to 600,000 carriers and drivers this year, Avdic said.

For the record, this is a directory that is free to users. They have an app, too, but it's only currently available for Android, but Avdic said an iOS version of the app would be available soon.

But along the way, Avdic's expertise branched out as well, adding digital content and SEO to his abilities, must-have skills for anybody looking to market a directory.

"I wanted to provide a great service, so I needed a great website," he said.

Avdic developed a passion for content, something he shares with the Love's digital team. We spent an hour or so comparing notes about Google's SEO trends and how to develop content that proves to be relevant to readers.

The rest of the conversation we'll file under "trade secrets," but it's always great to put a face to a name and meet the people behind your business partnerships on social, particularly a business with a service as vital to the professional driving community as Find Truck Service.